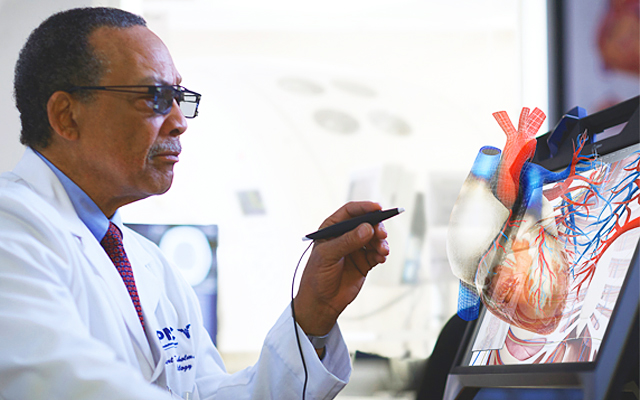 To the 3D printing that’s taking the medical world by storm, we can now add another innovative, three-dimensional technology – interactive virtual reality. Wearing special goggles and manipulating instruments, clinicians can examine diagnostic images that appear to float in space in front of them.

Not only can they view organs, like the brain, heart and colon, but they can also turn them over, dissect them, and make all kinds of precise measurements – of blood vessels, aneurysms, tumours, and other areas of interest.

The technology is showing great potential in a number of areas, including surgical planning. When faced with a challenging surgery or interventional procedure, such as closing off a ballooning aneurysm in the brain of a patient, a clinician can use 3D virtual reality to view the anatomy of the patient beforehand so there are no surprises when the actual operation is being conducted.

A leader in the field of 3D virtual reality is EchoPixel, Inc., of Mountain View, Calif., in the heart of Silicon Valley. EchoPixel’s True 3D technology is the first FDA approved virtual reality system for medical-image processing.

In addition to Stanford University, the Cleveland Clinic and the University of California, San Francisco, EchoPixel is now testing the technology in pilot projects with the Hospital for Sick Children, in Toronto, and the Toronto General Hospital’s cardiac centre.

“Doctors can dissect tissue and take things apart, all in 3D, on the screen in front of them using reconstructions of the patient’s actual anatomy,” said Sergio Aguirre, chief technology officer and founder of EchoPixel.

He explained the company’s technology turns the data sets collected from CT and MRI scanners, as well as ultrasound devices, into three-dimensional images that can be manipulated in a far more realistic manner than regular 3D reconstructions.

After all, traditional 3D constructions are still displayed on two-dimensional monitors. In contrast, virtual reality images appear to the eye as objects, just as they would when the clinician is conducting a procedure.

And using the True 3D system, clinicians can probe, cut, push and pull at tissue and structures to see what happens, all in real-time. That gives them a better idea of what to expect when they conduct the actual operations.

Using EchoPixel’s technology and tools, they’re able to better plan a surgery. “In the case of an aneurysm,” said Aguirre, “you can see how to approach the aneurysm, which structures need to be avoided, how much coil will be required to fill it, what size of coil is best, and the size of the catheter that should be used.”

Aguirre noted this allows for more accuracy and better outcomes: “It reduces the mistakes that are made. You don’t have to take out and replace implants afterwards, for example, because the wrong size was used.”

For some clinicians, virtual reality planning may be an alternative to creating 3D printed models, which can take days or weeks to produce. And with 3D printing, mistakes are sometimes made and the process begins over again.

“Our technology speeds up the surgical planning and the surgery itself,” said Ron Schilling, PhD, the CEO of EchoPixel. “And it gives clinicians the confidence they need to do the surgery.”

For clinicians who like working with 3D printed models, EchoPixel’s technology can also be used to help with the printing. Schilling said the software helps produce more accurate models, and it turns them out of the printer much faster.

That’s because a lot of the work in 3D medical printing involves the processing of images; EchoPixel’s True 3D performs the job much more quickly than other software packages, Schilling said.