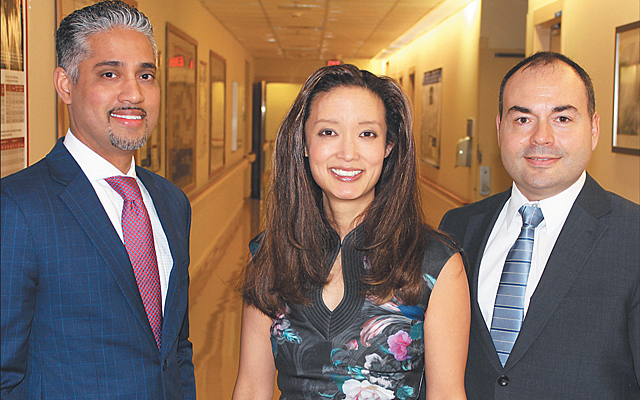 TORONTO – The Joint Department of Medical Imaging, which manages Diagnostic Imaging and Interventional Services for three downtown Toronto hospitals, has not only developed its own peer review software system for radiologists, it has also expanded the system to embrace technologists, as well.

That’s expected to expand the level of expertise among the JDMI’s DI professionals, who are already considered among the most advanced in radiology in Canada and around the world.

“All imaging activities need to have some form of quality control,” says Catherine Wang, the Executive Director of the JDMI, which includes the University Health Network, Sinai Health System, and Women’s College Hospital. “This is determined by the image quality from technologists and the accuracy of the image interpretation by the radiologists. Our peer review program, called Coral Review, supports multidisciplinary continuous learning for technologists and radiologists in quality improvement.”

Not only will the system be used to identify misses and near misses made by radiologists and technologists, but it is also an effective way of spotting best-practices and spreading the word among imaging professionals.

That’s because reviewers will see the highest-quality exams, too, said Wang, and they can learn how the images were captured at the regular Quality Rounds. These results can be discussed by Quality Leads and shared amongst technologists.

Paul Cornacchione, Senior Director of Imaging Operations for the JDMI, observed that reviews of the work of radiologists and technologists are now being done each day.

As the reviews of technologists are new, having just started in 2016, the system only looks at X-ray technologists. However, it will soon be expanded to embrace other modalities, as well.

And another innovation being pioneered at the JDMI is an alliance with the Michener Institute, an educational centre, to teach technologists how to review their peers effectively.

“The idea is not to be punitive, but to foster improvement,” said Cornacchione. He noted the work with the Michener Institute, which was folded into the University Health Network last year, will include workshops and simulations, where Quality Leads can learn useful methods of reviewing their fellow technologists.

Cornacchione said that issues for technologists often include the proper positioning of patients, optimal or sub-optimal imaging, and studies that are missing images.

The reviews are also a form of clinical quality control – when images are found to be missing from a study, they can be tracked down and appended to the file.

Cornacchione commented that UHN, through the expanded peer review program, is acknowledging the importance of technologists in diagnostic imaging. “Not only does the quality of imaging depend on the techs, they are doing more and more,” he said.

Technologists are giving clinical feedback to radiologists, in some cases, where they spot unusual things in images. As well, techs are being trained to do a wider range of procedures, such as inserting vascular lines and performing biopsies.

They’re highly trained to begin with – often they are graduates of four-year-long educational programs. And by conducting more procedures, they are taking the pressure off overloaded physicians and nurses.

But as with all clinical processes, the JDMI believes the continuous oversight and improvement will help all involved – technologists, radiologists and patients.

The JDMI developed Coral Review in the same way it created its own workstation for diagnostic imaging – it was dissatisfied with the systems that were available in the commercial marketplace.

So a team led by Leon Goonaratne, Senior Director of Informatics, JDMI, produced its own solutions. These systems have proved so useful that other hospitals are now deploying them.

Wang noted that the Ontario government is eager to see quality controls implemented in radiology and other hospital departments across the province, and Coral Review may help.

The plans include more than diagnostic imaging, too. Goonaratne says there have been discussions to expand the use of Coral Review to include pathology and cardiology.

The peer review system can be customized to suit various ‘ologies’, as well as to the needs of various hospitals and health regions.

“The software lets you do reviews based on rules,” observed Goonaratne, and those rules can be modified to suit the needs of the users – in various regions and for different clinical purposes. As well, a data analytics system can be attached, to capture knowledge about how clinicians and technologists are functioning as individuals and as a group.

Coral Review appeals to other hospitals on a financial basis, as the JDMI isn’t running the effort as a profit-making business. Instead, is geared toward system-wide improvement.

“We don’t charge for the software, but users do pay for the costs of implementation,” said Goonaratne. “We’re charging just enough to have a little to put back into development.”

He said that all users are given software updates and improvements, which come out on a continuous basis. As well, the development team at the JDMI accepts requests for new features from the new users, which helps with the overall quality and usefulness of Coral Review.

“We could charge more, but our aim isn’t to make profits,” says Wang. “It’s to improve the quality of care and patient safety throughout the province.”