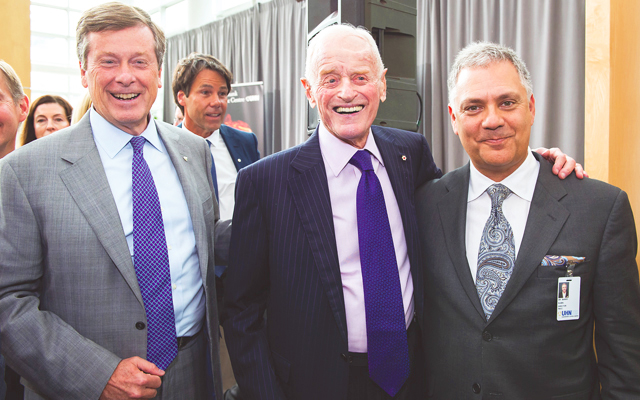 TORONTO – The Peter Munk Cardiac Centre will use a $100 million gift to create new technologies to treat heart disease– helping it to reinvent the future of cardiac care and simultaneously turn it into one of the top heart hospitals in the world.

The aim is to provide care on par with or better than the Cleveland Clinic, which is consistently rated as the number one cardiovascular hospital.

“We’re aspiring to that level and beyond,” commented Dr. Barry Rubin, medical director of the PMCC, which is part of the University Health Network in downtown Toronto. “We’re trying to do things that have never been done before.”

The landmark $100 million investment was announced on September 19, 2017. It’s being provided over a 10-year period by Canadian philanthropists Peter and Melanie Munk, and will be used to fuel the creation of advanced technologies at the centre.

With computer and clinical experts inside the hospital and through alliances, the cardiac centre will marry new solutions in artificial intelligence, machine learning, wearables and remote monitoring with patient care and research.

The goal is to both reduce the costs and pressures on a healthcare system that’s bursting at the seams, and to simultaneously improve medical outcomes for heart patients.

Already, the PMCC has formed an alliance with the Vector Institute in Toronto, which is building a centre of excellence in artificial intelligence, and draws on the expertise of Google and the University of Toronto.

According to the University Health Network, over 1 million Canadians are currently living with heart failure, and the numbers are increasing by 50,000 each year.

“Our hospitals are full now” said Dr. Rubin. “The only way of managing will be to take care of patients outside of hospitals.”

To that end, he explained, the PMCC is creating an electronic platform that will use AI to mine the data of heart patients at the centre, as well as those who have been discharged. It will use the results to identify patients at risk of sudden, catastrophic cardiac events.

“We have 163,000 outpatient visits a year, and we perform 9,000 cardiac and vascular procedures a year,” said Dr. Rubin. There’s a lot of data collected about these patients.

“That could be used to predict who needs to stay longer and who could be safely discharged. And it can help us increase the efficiency of bed utilization.”

And by combining analytics with real-time monitoring, patients in the community could be actively monitored. “With remote monitoring and artificial intelligence, you can identify the precursors to potentially serious or fatal heart arrhythmias that no human could detect,” said Dr. Rubin.

As a result, heart failure patients at home can live with a better safety net – if they are developing problems, they will be identified before real trouble occurs. “We’re aiming to detect events that may precede a catastrophic event,” commented Dr. Rubin.

This means the patient can immediately get advice from his or her doctor – medications could be adjusted, or other steps could be taken to avert a heart attack or hospitalization.

The brainpower and software to conduct this kind of real-time monitoring is considerable. But already, the Peter Munk Cardiac Centre has started to create the smart platform that’s needed. It currently has 48 different databases of patient information.

Those are the databases that will be mined to create new algorithms for predicting heart problems. But first, they must be consolidated, to create a super databank of information that includes lab and imaging test results, surgical and medication outcomes, imaging studies like X-rays, CT and MRI scans and ultrasounds, and genomic data.

In a proof of concept, a project led by Dr. Heather Ross at the PMCC has successfully combined six of the databases, work supported by the Ted Rogers Centre for Heart Research. Funds from the $100 million gift will be used to continue the work, to join the remaining databases to create what Dr. Rubin calls a “data lake”.

That lake will only get bigger, as thousands of patients at the PMCC start feeding data from their computerized wearables into the system, while maintaining data security and privacy. The amount of data collected from real-time devices is mind-boggling – it will include blood pressure, temperature, body weight, blood oxygen saturation, and even the signals from pacemakers. “The only way of processing that volume of information is to employ AI and machine learning,” said Dr. Rubin.

In partnership with the Vector Institute and other organizations, work will be done on predictive analytics – the smart systems that will actually digest all of the data and make sense of it.

Smart systems will instantly spot patients in danger – including those on the verge of catastrophe and those facing dangers down the road. “We’ll look, for example, at whether there are any particular findings to predict which patients will get narrowing of the aortic valves,” said Dr. Rubin.

Not only will systems be devised to identify these patients and alert them and their physicians. The data will also be used to develop therapies.

Indeed, using the genomic data, personalized medications and procedures can be created.

“We could develop cures,” said Dr. Rubin. “This is bedside-to-bench and back to bedside research-and-development. It’s unbelievably powerful.”

In another part of the project, PMCC will be ramping up clinical trials to test its therapies. Not only is there funding for the trials, there is also space allotted for conducting the work.

Dr. Rubin observed that the transformational project has been mapped out in a 135-page document, with ‘deliverables’ to be presented to a board at regular stages throughout the 10-year lifespan of the investment.

He foresees real results by the end of the 10-year period – which is still what he calls “an aggressive schedule,” based on the magnitude of the work to be done.
There is also a plan to commercialize the technologies and products that are generated. This will be done in partnership with the UHN’s Techna Institute, which has expertise in spinning technologies and businesses into the marketplace.

The profits from any sales of this sort will be plowed back into the PMCC, to fund ongoing work, said Dr. Rubin. “Even $100 million will run out,” he noted. “We’re thinking of how to fund our work after that.”