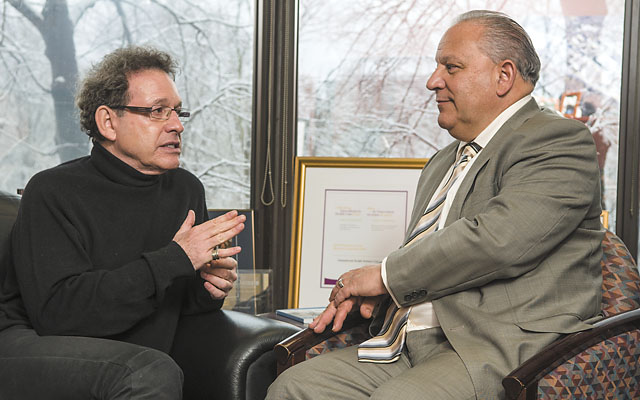 TORONTO – Sunnybrook Hospital is about to ink an agreement with the Ontario Institute for Cancer Research to share genomic research, IT processing power and Big Data resources. The two organizations are banding together to improve the care of oncology patients and to lead the way in the ‘personalized medicine’ revolution.

Many hospitals in Canada are now applying newfound knowledge of the human genome to individual diagnoses and therapies – a movement in healthcare known as personalized medicine. In most cases, they’re going it alone, with each of them building massive research facilities for decoding genetic maps and creating giant data warehouses to process the information.

However, Sunnybrook and OICR decided to buck the trend and join forces – a strategy designed to build synergies and speed up the process of achieving breakthroughs.

“So many Canadian hospitals are doing the exact same thing,” commented Dr. Michael Julius, vice president of research at Sunnybrook. “Why not work together and become more efficient?”

Dr. Julius noted that hospitals around the world are now sharing resources when it comes to applying genomic information to the treatment of diseases. That’s because making sense of genetic information is a massive job, and requires the collaboration of as many skilled scientists and researchers as possible.

“No one hospital will be able to do it on its own,” said Dr. Julius. “We’ll need thousands of hospitals to be involved and working together.” To that end, he is inviting other Canadian hospitals and research organizations to collaborate with Sunnybrook and the OICR.

To get things off the ground, Sunnybrook and OICR are focusing on one form of breast cancer, ductal carcinoma in situ. They’ve launched a beta project with 2,000 to 4,000 patients, and after sequencing their tumours and analyzing the genes that are firing and misfiring, the Sunnybrook/OICR team believes it will be able to determine which therapies are useful to the patients, and just as importantly, which are not.

“Can you imagine the impact this will have on a breast cancer patient,” asked Dr. Julius. “We can determine how a tumour will metastasize, whether certain medications will work or not, and whether surgery will help or is even necessary.” It means that in the future, some women will be able to avoid the punishing rigors of chemotherapy or the disfigurement of a mastectomy.

For its part, the Ontario Institute for Cancer Research has built up internationally recognized expertise in cancer genome sequencing and analysis. It has 100 computer scientists in Toronto alone that are dedicated to cancer informatics and Big Data.

In addition to supporting the clinical trials and research of 27 cancer centres across Ontario, it’s also a member of the International Cancer Genomics Consortium, which is currently decoding 25,000 tumour samples to create a catalog of mutations for 50 types of cancer. The global consortium’s informatics hub – the computer infrastructure, databases and analytics – is led and operated by the OICR team in Toronto.

While the OICR is involved in cuttingedge research in Ontario and around the world, the project with Sunnybrook is breaking new ground. “The level of integration is much deeper than with any of our other projects,” said Dr. Tom Hudson, president and scientific director of the OICR. “We’re combining longitudinal patient data from Sunnybrook, including pathology, imaging, and clinical information about the women before and after their treatments, with genomic sequences. That’s never been done here before.”

It’s all in a bid to determine the best way of treating the breast cancer that’s being studied. Once a database is developed, populated and analyzed, and results are obtained, the team plans to move on to other cancers and diseases, Dr. Hudson said.

When will the project see results? “That’s the $64,000 question,” asserted Dr. Julius. Sunnybrook’s research chief is bullish and predicts they will see results generated over the next 18 months to two years. Some of the initial work will focus on the creation of unified database, marrying various forms of clinical information from Sunnybrook and genomic data from OICR.

Once that job is hashed out, the team will be able to apply the knowledge of experts from both organizations. “It’s a fouryear project,” said the more conservative Dr. Hudson, “but we could have discoveries before then.”

Within Sunnybrook itself, the personalized medicine project has been made possible through teamwork, as Dr. Julius has also joined forces with the organization’s CIO and vice president of corporate strategy, and capital re-development, Sam Marafioti.

“My team has the clinical records and analytics engine, and Michael’s team has the research capacity,” said Marafioti. Indeed, Sunnybrook’s researchers have been working for years to make sense of the human genome and to apply the knowledge to diseases such as cancer. A good portion of their work has been funded by the Canada Foundation for Innovation.

Meanwhile, Marafioti and his group have been delving deeply into analytics and Big Data as part of the third pillar in Sunnybrook’s information technology strategy. The first pillar of that strategy was to lead the way in the creation of the personal health record (PHR), a method of helping patients take charge of their own health.

Marafioti says the goal has been achieved with the hospital’s creation of the MyChart system. “We’ve now got 42,000 users from Sunnybrook, Baycrest Hospital, Central CCAC, and MedicAlert, Soon we will be expanding to other organizations such as Mount Sinai Hospital and CML Labs.”

The second pillar of the strategy was to optimize workflow for clinicians, something that Marafioti’s team accomplished through the development of ‘Sunnycare’– which was developed with funding support from Canada Health Infoway and was recently named a Canada Health Infoway LEADing practice.

Now, Marafioti is focusing his efforts on the third pillar of the information management strategy and analytics, with the goal of extracting more meaning from the data that’s regularly collected at the hospital.

To be sure, the project with OICR will require additional investments in technology, human resources and other infrastructure – in dollar terms, the stakes will be very high. Dr. Julius warned that to see real progress in the future, governments will have to jump aboard and provide “serious dollars”.

He observed that one of the international leaders in personalized medicine, Vanderbilt University in Tennessee, has itself invested about $1 billion in this area. Dr. Hudson noted that the International Cancer Genome Consortium has put another $1 billion into its projects.

The work at Sunnybrook and OICR, Dr. Julius estimated, will require some $200 million in investments over the next five to 10 years.