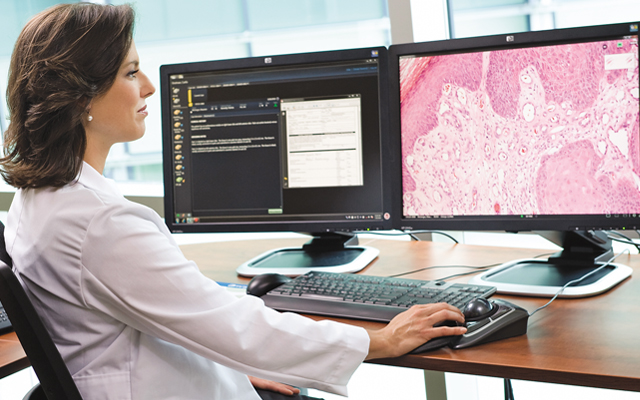 ST. JOHN’S, N.L. – A province-wide network for telepathology, said to be the first in the country that’s Health Canada-approved, is about to be launched by Newfoundland and Labrador. The $2.5 million project will help improve the diagnosis of cancer and other diseases for patients throughout the province by electronically connecting hospitals to experts at Eastern Health, in St. John’s, and ultimately, to other specialists in Toronto and Winnipeg.

Pathologists are in short supply in Newfoundland and across Canada, especially in rural areas. Often, hospitals must prepare slides and send them by courier for an interpretation by pathologists in larger centres, like St. John’s. That can be a slow process.

However, by using the telepathology system, hospitals in Newfoundland and Labrador will be able to digitize the tissue samples and electronically send the images securely across the telehealth network for interpretation, a system that will provide faster results.

“We’ve got pathologists throughout the province, but often you need a sub-specialist,” said Mike Barron, CEO of the Newfoundland and Labrador Centre for Health Information. “If there isn’t the right sub-specialist available in a hospital, they’ll soon be able to connect with one in St. John’s.”

He added that the network, in this way, “will improve the quality of care and patient safety.”

Barron noted the 2009 Cameron Inquiry recommended that alternative methods of providing pathology services be investigated in Newfoundland, after 383 women received incorrect diagnoses of breast cancer. Of these, 117 required a change to their treatment programs.

The new digital pathology network is, in part, an answer to this recommendation.

Several other Canadian provinces have experienced incidents of incorrect diagnoses of cancer, and are also taking steps to improve the quality of pathology services.

The platform was developed by Omnyx, a joint venture of GE Healthcare and the University of Pittsburgh Medical Center. Based in Pittsburgh, Penn., Omnyx has been pioneering the development of telepathology scanners, workstations, networks and workflow software.

In recent years GE and Omnyx partnered with the University Health Network (UHN) Laboratory Medicine Program, in Toronto, to test and validate the Omnyx digital pathology system, in a project that linked UHN’s pathologists with a hospital site in Northern Ontario.

An additional $1.4 million is being invested by Canada Health Infoway. The first phase will see these centres connected to Eastern Health, in St. John’s. A later phase will connect the hospitals with pathologists in Ontario and Manitoba – part of a pan-Canadian telepathology project that’s being spearheaded by Infoway.

Barron observed that once the system is up and running, it could also be used for obtaining second opinions. “Pathology is not an exact science, and it helps to get second opinions for a diagnosis,” he said.

GE Healthcare through Omnyx has devised scanners, display stations, software and transmission technologies that together produce a solution that could transform the delivery of pathology services, allowing pathologists to digitally view and rapidly share slide images with colleagues, regardless of locations.

To further enhance accuracy and speed of diagnosis for pathology, GE Healthcare and Omnyx have partnered with Real Time Medical, also of Mississauga, Ont. Real Time Medical has developed workflow software that allows pathologists to collaborate; it automatically alerts colleagues to new cases to review, tracks review progress and enables pathologists to report results through the network.

“It enables collaboration between specialists, allowing them to improve the quality of the diagnosis. It extends the reach of their skill sets,” said Ian Maynard, CEO of Real Time Medical.

And when slide images are sent to pathologists for interpretations, if one is busy, the case is automatically rolled over to another pathologist. That ensures there is never a delay to have a case read.

“The turnaround time for a diagnosis in remote regions can be days or even weeks when you’re shipping slides by Fedex,” commented Mike Clarke, General Manager of GE Healthcare IT Canada. “By eliminating need for shipping and transportation, we are making pathology slides immediately available for the consulting pathologist to read.”

Clarke said, “Our workflow software is second to none, the scanner is easy to use, and the compression and streaming technology is one of our breakthroughs.”

He observed that pathology files can be quite large, up to 10 times larger than radiology files, and compression and efficient streaming is needed for files to be moved across the network more efficiently. “Compression reduces network impact without compromising the pathologists’ viewing experience,” said Clarke.

What’s more, he said, the solution is one of the few that’s Health Canada approved.

Clarke noted that Newfoundland and Labrador is not only one of the first jurisdictions in Canada to create a telepathology network, it’s also a North American ground-breaker in the transformation of pathology – a field that is ripe for technological modernization. “It’s great to see Newfoundland leading the way.”