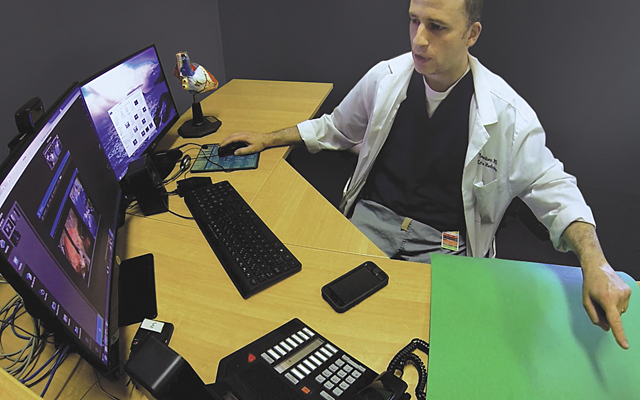 MONTREAL – A Canadian cardiologist/intensivist with entrepreneurial flair has launched Reacts, a company that offers high-powered videoconferencing at low prices, making it easier for medical professionals to collaborate.

The Reacts platform is said to bring the performance of expensive videoconferencing systems, which often require special equipment and dedicated rooms, to standard, off-the-shelf desktop computers, tablets and smartphones.

It’s a solution that could very well shake up the telehealth sector – turning what was once a specialized art into an everyday tool that can be used by doctors, nurses, and patients alike.

Significantly, the system can handle multiple video streams with little loss of speed. Healthcare professionals can watch each other in conversation in one window on a computer screen, while viewing a patient’s face in another, and zooming in on a problem, like a wound, in a third window.

“With Reacts, health professionals can teach, supervise and provide remote care as if they are right next to their patients, colleagues and other professionals,” said Dr. Yanick Beaulieu, a cardiologist and intensive care specialist who works at Hôpital du Sacré-Coeur de Montréal and led the creation of Reacts. “My team and I call this hyperpresence.”

The company has produced unique features that could be of great use to professionals in healthcare, like augmented reality and real-time image overlay. For example, a feature called ‘chromakey’ allows users to superimpose their own hand-gestures over the images or streams being viewed – much like the ‘green-screen’ effect used in television weather reports – showing exactly where to make an incision or how to treat a bed ulcer.

A surgeon, for example, could provide guidance to other physicians operating at a remote location; or an experienced nurse could offer help to a neophyte nurse providing wound care to a house-bound patient.

“Tertiary hospitals are often called for help by community hospitals, but these smaller hospitals don’t have telemedicine rooms,” said Dr. Beaulieu. “They end up texting and sending pictures on their smartphones, which isn’t very effective and also isn’t traceable.”

Smaller hospitals that do have traditional telemedicine equipment are often hamstrung by the need to schedule the equipment beforehand. That’s not much help in the case of fast-breaking medical emergencies or problems that require a quick answer.

What was really needed, said Dr. Beaulieu, were telehealth systems that were inexpensive and readily available – using everyday computer and telephone equipment. And of course, the systems had to be secure, given the sensitive nature of medical information.

“We created a very secure solution that costs only $84 a year for each user, runs on Windows devices in its full version and on Android and iOS devices in its “lite” version,” said Dr. Beaulieu. He noted that Reacts makes use of the highest security standards, which are required for healthcare applications in Quebec and other provinces.

A relatively new language for web video called Web RTC is used in Reacts, which also helps boost operating speeds. To date, Reacts has been used in pilot projects by four major health systems in the province of Quebec – at McGill University Health Centre, the CHUM, CHUS and CHUQ.

It has also been trialed in New York, as well as hospitals in Europe. It is now being launched for general use across Canada, the United States and around the world.

Dr. Beaulieu started working on Reacts in 2012, and he now employs a team of 12 computer and communications experts. For his part, Dr. Beaulieu previously created two companies that produced systems used for teaching ultrasound skills. Both were sold to CAE Electronics, which specializes in aviation and medical simulation and training systems and now markets the solutions worldwide.

Reacts currently works in two versions – full and lite – on Windows computers and phones. The lite version is available on Android, and the Macintosh and iOS versions will come out in 2015.

Dr. Beaulieu notes Reacts includes integrated checklists and reports so that sessions can be documented and stored for later review and for teaching purposes. Users can also overlay three-dimensional objects on still or video images – another nice feature for instructors.

The system can display any type of image or live feed, including PACS and pathology images, echocardiograms, along with live video images.

In 2015, Reacts will add a drawing package, so that users can draw on top of images – an additional asset to instructors and students.

In the summer of 2014, Reacts was used at the Montreal Grand Prix. It wasn’t a frivolous exercise – the tool helped medics provide care. In one instance, an accident occurred and patients were flown by helicopter to a nearby hospital. Reacts was used to provide video images and instruction right in the helicopter, with doctors at the hospital instructing the crew.

“The hospital could follow the patient in the helicopter through Reacts using a cellular connection,” said Dr. Beaulieu. “It worked well.”

He noted the system could be used by ambulances, as well, in the case of trauma or other situations. Doctors could remotely instruct paramedics, enabling advanced care to occur even before the patient reaches the hospital.

Currently, Reacts is a point-to-point solution. It can support numerous video feeds, along with file transfers, but only from one site to another. In 2015 the plan is to launch the multi-point version, where several sites can all communicate with each other. One might wonder about the performance of the system across Canada, since the servers are housed in data centres in Montreal. But Dr. Beaulieu observed that Reacts recently conducted tests with users in Hong Kong, with startling results. “There was virtually no latency,” he commented.

Now, he said, healthcare groups in Morocco are set to begin using it, as well.

Despite who uses the system, no personal health data resides on the system – all information stays at the hospital, clinic or location in which it originated. Reacts is strictly the bridge that connects various users.