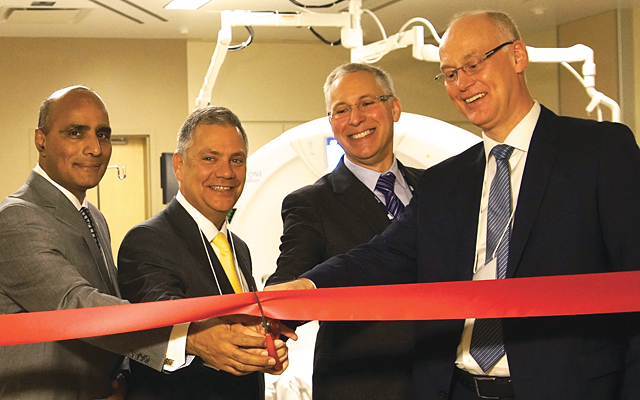 Dr. Narinder Paul, like Noah, has faith that two are more productive than one. Especially if they are a pair of Toshiba’s Aquilion ONE Vision Edition volume CT scanners, working side by side.

Dr. Paul, a British-educated radiologist and internationally recognized expert in image optimization and dosage reduction, is the head of cardiothoracic imaging at Toronto General Hospital (TGH), a cornerstone of the larger University Health Network (UHN) and the multi-hospital Joint Department of Medical Imaging.

As such, in April Dr. Paul was front-and-centre at TGH’s Peter Munk Cardiac Centre for the launch of a joint, multi-year JDMI and Toshiba of Canada project featuring two identical Vision Edition scanners, operated from one control room.

This first-ever arrangement gives the Peter Munk Cardiac Centre the unique ability to expedite transferring what one CT is storing as research-proven protocols for imaging procedures to the other CT for use by clinicians caring for actual patients.

So why the need for two CT scanners?

“Typically, you have separate scanners for doing research and clinical work,” says Dr. Paul. “And so often those scanners are different machines. Maybe one is older than the other, or they’re from different manufacturers. Likely they are also in different parts of the hospital, each with their own control room, and for sure each with different ways of handling protocols.

“So if you identify a procedure or protocol for research subjects that might be applied to actual clinical patients, there’s a lot of effort involved in translating those protocols from the research scanner to the clinical scanner. It might take days or even weeks to work the differences out and transfer the new protocols over.

“But now, with our identical twin scanners, if the new imaging practice protocol in the research scanner does not need to be peer reviewed, then we can make the transfer from it to the clinical scanner and put it to work on patients in the hands of our technicians and clinicians – almost instantly.”

As Dr. Paul further points out, even if a new protocol coming out of research needs to be properly reported in medical journals and thus peer reviewed, a process itself that can take months to complete; once it does get the nod, the new protocol can be put into action on the front lines of healthcare with the same swiftness.

With more and better imaging practices coming out of research being applied sooner, clinicians will be able to see the detailed images of the bone, blood vessel, and tissue conditions they seek to understand and treat. From that better knowledge, care givers should be able to map out better, more effective treatment plans.

What may also come of all this, is yet better scanning machines, especially from Toshiba.

“We have partnerships like this one in Toronto, and we work closely with the technical people and caregivers who actually use the scanners because it shortens our cycle of innovation,” says Jens Dettmann, Toshiba of Canada General Manager and Vice-President, Medical Systems Division. “The partnerships give us a faster feedback loop to our engineers back in Japan.”

Toshiba’s research and development work with UHN stretches back a good number of years; one previous project included multidisciplinary teams working on the fusion of imaging technologies. The Peter Munk Centre clinicians involved in that project have in turn influenced the design of Toshiba scanners in significant ways with their feedback, reports Dr. Paul.

But do the results of working with two $3 million dollar scanners have meaning for other parts of the country?

“Very much so,” says Dr. Paul. “What we are developing here is a model that others can emulate, regardless of the machines they are using. By pairing two compatible machines, you can bring research and consequent treatment together sooner.”

What they likely won’t be able to emulate quite is how low they can go, in terms of smaller radiation dosages patients are exposed to during a CT scan. First there’s the Vision Editions’ gantry speed of just barely over a quarter of a second to make one rotation, and yet still capture a highly detailed image in that one eye-blink turn.

“So with that gantry speed and the very high sensitivity of the scanners, what we can do now with our research scanner is to keep dialing down the dosage just to the point where it is at its lowest possible to get the kind of detail clinicians need for a particular examination,” says Dr. Paul. “Then we can put that lower setting into a new protocol and instantly transfer it over to the clinical scanner for use with patients that same day.”

Not without willing hands to help, however. “I can’t emphasize enough how important the nurses, the radiological technologists, and others who use these machines every day are to the innovation and partnership process as a whole,” says Dr. Paul. “Without their knowledge and constant feedback on the protocols we may develop, the partnership and its benefits to all its partners simply wouldn’t work.”

Besides Dr. Paul’s efforts to make this world-first bench to bedside partnership work, are other UHN project veterans, including Dr. Barry Rubin, the Peter Munk Cardiac Centre’s Medical Director, and Dr. Larry White, the Radiologist-in-Chief for the UHN’s Joint Department of Medical Imaging. The team embraces over 600 staff, 75 radiologists and 80 resident fellows, the largest speciality grouping of any kind in Canada.