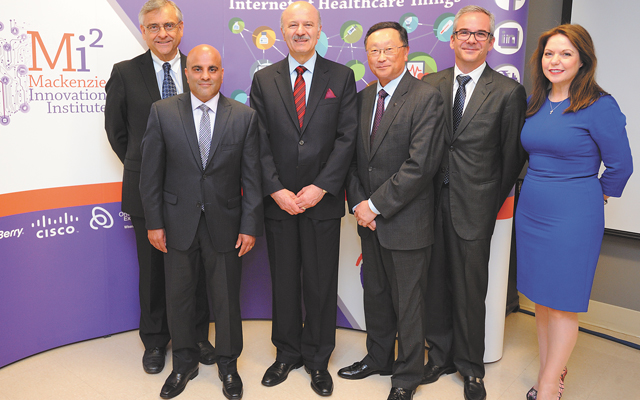 RICHMOND HILL, ONT. – Mackenzie Health has announced the second phase of its Innovation Unit, a living laboratory with 34-beds that is about to implement and test smart messaging and clinical alerting, in conjunction with partners BlackBerry, Cisco and Thoughtwire.

The innovative hospital also announced the launch of its Mackenzie Innovation Institute (Mi2 – pronounced Mi squared), which will manage the innovation unit.

Mi2 has benefited from a $350,000 award from the Ontario Centres of Excellence, given earlier this year, along with contributions from the partners that have boosted the amount invested in the project to over $1 million in cash, equipment, software and services.

In the first phase of the project, announced in 2014, the hospital installed and tested technologies such as smart beds that could determine whether a patient was leaving the bed, smart badges that can determine the location of nurses and other clinicians, and a hand-washing tracking system to deliver safer patient care.

Phase two of the project, which went live in August, focuses on a smart mobile clinical messaging and alerting system. Leveraging the Internet of Things (IoT), it electronically links medical devices such as bedside pumps and monitors to caregivers, while using intelligent rules to optimize the routing of messages among doctors and nurses and to also prevent ‘alert fatigue’.

Caregivers will be able to quickly assess whether or not the system is useful, and to suggest improvements; as well, the project will benefit from a formal study by academic researchers at the University of Toronto.

Mackenzie Health president Altaf Stationwala, speaking at a launch event in June, said that Mi2 is all about improving the quality of care, and ensuring the hospital is making the right technology investments.

In the past, he said, “We were not feeling that we were making the best technology investments. We introduced all kinds of technology, but our nurses weren’t able to spend the time they needed with patients.”

Instead, they were doing documentation, running from one part of the hospital to another to check the readings from devices or to look up information at workstations.

Mackenzie Health’s worries about workflow and technology investments were brought to the fore when it started planning a sister hospital, Mackenzie Health Vaughan, which will be built nearby and is to be completed in 2019. “Eighty percent of the rooms in the new hospital will be private, for better infection control,” said Stationwala, adding that the distances that doctors and nurses travel to reach patients will also increase. “That means our staff will have to be on rollerblades to deliver care,” he quipped.

Hospital management realized that better communications could solve the problem, and decided to test the solutions. “It’s a practical solution to provide information where the nurses and doctors are, and to provide it on their phones,” said Stationwala.

He observed that two of the major problems in healthcare today are the duplication of services that occur, and the constant delays in getting the right information to caregivers. Patients are constantly asked for the same information over and over again; and because information isn’t always readily available, clinicians tend to repeat tests.

“If you can improve these two factors, you can reduce costs and improve outcomes,” he said. “Who can argue with that?”

The new system will bring the information that’s needed right to the BlackBerry smartphones used by the nurses and other caregivers. “Staff are not stationary,” he said. “They’re constantly moving. And they need information wherever they are, in order to make timely decisions.” BlackBerry phones were chosen because of the high degree of security they offer.

BlackBerry CEO John Chen participated in the launch event in June, and said that healthcare is a key market for the company as it puts its corporate turnaround into effect. “We want to be the worldwide leader in privacy and security. You quickly realize that the verticals that need this are the regulated industries – government, healthcare and financials.”

As part of its commitment to the healthcare sector, BlackBerry is partnering with Mackenzie Health in a bid to create new and innovative solutions. “Will it be a replicable solution?,” he asked. “That’s what we will find out, and that’s the risk we are taking.”

The knowledge that is gained in the innovation unit will be used not only in the rest of the hospital, but at the new Mackenzie Health Vaughan facility; as well, hospital leaders hope the knowledge will be disseminated to other facilities across Canada.

“We’re taking the lessons that are learned from this project and providing them to the architects working on the new hospital,” said Tiziana Rivera, chief nursing executive. “The design of the new hospital, in Vaughan, will benefit from what we’ve learned here about technology and workflow.”

Rivera added that the hospital will be sharing the information with all other hospitals who are interested. “It’s publicly funded research,” she said. “It should be used to benefit everyone.”

Not only will clinicians receive alerts from medical devices on their BlackBerry phones, but they will also have access to electronic patient records. This will give care-givers an unprecedented amount of information, all at the point-of-care or anywhere they may be in the hospital.

“It’s unique,” said Rivera. “Nobody else in the country is doing this.”

The smart features of the system, supplied by ThoughtWire through its Ambiant platform, will help clinicians deal with problems like alert fatigue and determining which patient to see first. “The system prioritizes the alarms and tells you who should be attended to first,” commented Mike Monteith, CEO of Toronto-based ThoughtWire.

He observed that the system will also rollover the alerts and calls to other clinicians, if an alert or patient problem is not dealt with in a given period of time. Interestingly, it is able to contact the closest clinician, through the use of real-time location systems (RTLS).

“We want everything moving more efficiently,” he said. Not only will clinicians be providing feedback on features that should be added, or applications that should be tweaked, but researchers at the University of Toronto will be modelling the data to come up with improvements.

“They will be running simulations,” said Rivera. “They’re going to model our workflows, and they will see if things can be advanced by doing them in different ways.”

CIO Dianne Salois-Swallow added that the whole project is being conducted in a spirit of open collaboration and cooperation. “We see the companies who are working with us as more than vendors, they are our partners.”

She said the hospital’s CMIO, Dr. Aviv Gladman, along with Chief Nursing Executive Rivera, have been key to the project. So too have been CEO Stationwala and Chief Financial Officer Richard Tam. Together, said Salois-Swallow, they have injected an energy into re-engineering the hospital and healthcare, in general, that wasn’t there before.

At the MedEdge conference, a separate event held in Richmond Hill in June, Dr. Gladman said the hospital is essentially building “an Internet of Healthcare Things”. In addition to the hospital, “we can do it in homes and the community, too.”