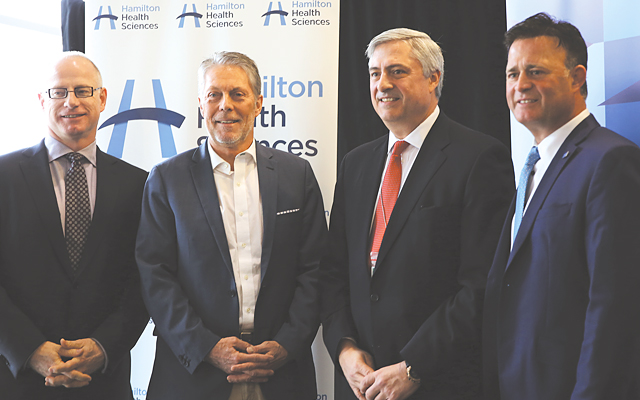 IBM brings Watson to Canada in partnership with HHSC

HAMILTON, ONT. – Hamilton Health Sciences and IBM Canada are partnering to launch a healthcare innovation centre in the downtown core of the city – a move that will help with Hamilton’s transformation from Steel City into a high-tech hub. Teams from both organizations will soon move into what used to be a Stelco office building that’s located in the downtown core.

“We’re re-inventing Hamilton through healthcare,” said Dino Trevisani, president of IBM Canada, who is himself originally from Hamilton. “We’re going to make this a centre of excellence in Canada and for the world.” Trevisani spoke at a well-attended event, held at Hamilton Health Sciences, to publicize the announcement.

Significantly, researchers at the new collaboration centre will be the first in Canada to make extensive use of IBM’s Watson artificial intelligence software for healthcare.

Watson gained instant fame in 2011 when it trounced the reigning Jeopardy champion, Ken Jennings, in two televised matches. At that time, Watson required 10 racks of computers that filled a room; today, Watson software requires only a single server that’s the size of the vegetable drawer in your refrigerator. And because of streamlined software, it runs 24x faster than before.

That, in itself, is an indication of how quickly computer technology is advancing. Hamilton Health Sciences, for its part, is a powerhouse in health technology and has pioneered, among other things, advanced applications in region-wide, patient decision support and a predictive analytics system called HEWS. This latter solution gathers data from patient monitors and medical devices and provides early warning of when a patient is running into trouble.

It’s these two applications that will be the starting points for the teams from HHS and IBM. They will further develop the systems, both for use at Hamilton Health Sciences and for commercialization in Canada and around the world.

“With the integrated data system, six LHINs are already feeding data into the solution,” said Mark Farrow, HHS’s vice president of information technology and CIO. “We can see how patients are using the healthcare system. Now, we can take it to the next level using Watson.”

The system could be a boon to managers and planners, enabling them to better match the resources that are needed at healthcare facilities with real-time demand from patients.

Similarly, the intelligence of Watson will be tied to the early warning system, further improving the predictive capabilities of the solution.

The president and CEO of Hamilton Health Sciences, Rob MacIsaac, noted the new centre will be both a physical and virtual work space. Through the web and teleconferencing, patients, start-up businesses and R&D staff at large corporations can all interact with technology developers at the downtown facility in Hamilton.

In addition to IBM’s Watson Health, the team in Hamilton will also have access to IBM’s expertise in cloud computing, super-computing, and many other technologies.

Researchers from nearby Mohawk College and McMaster University will also be participating in the project and will bring their own expertise and interests.

The innovation centre is designed to spur the development of spin-off companies and will act as a business incubator. The province of Ontario is involved in the centre through its chief health innovation strategist, Bill Charnetski, who helped broker the deal and make the project happen. Charnetski said the goal is not only to produce start-ups, but to see them grow to 10, 100 and 1,000 employees.

Barry Burk, IBM Canada’s vice president of health, noted the new centre in Hamilton will be the first in Canada “where we’ve deployed Watson for human healthcare in a meaningful way.”