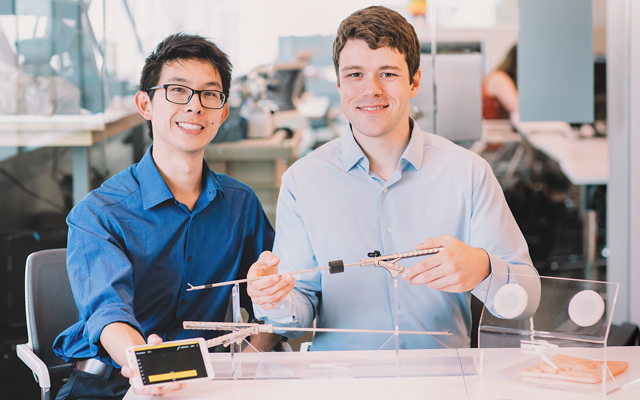 TORONTO – Minimally invasive surgery has revolutionized the practice of medicine in recent years, as it dramatically reduces the size of incisions needed during operations and decreases the need for blood transfusions. It also reduces infection rates and recovery times.

However, issues still remain, including minimal feedback for surgeons and interventional radiologists, who must work with a deprived sense of touch. This can lead to medical error during MIS – such as organs that are accidentally punctured or nicked.

A Canadian innovation may prove to significantly enhance the safety of these minimally invasive procedures.

The forces detected by the film are wirelessly communicated to the surgeon, providing live force-feedback that allows the surgeon to determine exactly when dangerous levels of force are nearing.

Winning the national leg of the James Dyson Award will inject $3,400 into the project.

“Unlike most medical sensors, ForceFilm is uniquely economical and environmentally friendly because it can be steam sterilized and reused,” said Robert Brooks, co-founder of ForceFilm. “We will be using the prize money to make ForceFilm last even longer.

“This will allow us to try different formulations and constructions of film and build test apparatuses to repetitively test them for abrasion and steam resistance, with the goal of having ForceFilm last a full year in surgical use.”

Working on the technology over the course of two years, Brooks and Wee have had three major revisions of the prototype, with each revision involving modification on the circuit board. The first generation of the technology was used in an education study with 19 urologists at the Hospital for Sick Children in Toronto. The proof-of-concept study revealed a significant difference between the force application of novice, intermediate and expert surgeons.

Brooks added: “Winning the national James Dyson Award means we can get the word out about our technology and how ForceFilm can have a life-saving impact on minimally invasive surgery.”

ForceFilm is joined by four runners up who will move on to the next stage of the James Dyson Award, where a panel of Dyson engineers will select an international shortlist of 20 projects.

The award encourages ideas that challenge convention, lean engineering – less is more, and design with the environment in mind. The best inventions are simple and practical yet provide a solution to a real-world problem. A national winner is selected for every country the award runs in, before going through to the final phase where the international winner is chosen by James Dyson.

The award is run by the James Dyson Foundation, a registered charity set up in 2002 which exists to inspire and support the next generation of engineers. The international prize is $50,000 for the student and $8,500 for the student’s university department.