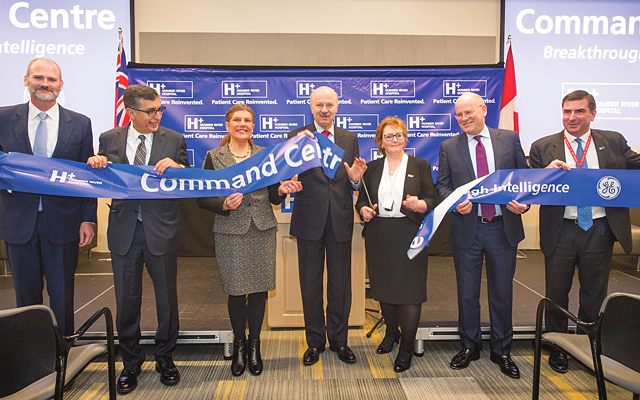 TORONTO – Humber River Hospital announced the opening of its Star Trek-like Command Centre with an auditorium full of visiting luminaries in attendance – including GE’s CEO John Flannery, two Ontario government cabinet ministers, and doctors and administrators from 13 U.S. hospitals who came to learn about the AI-powered centre.

It’s the first Command Centre in a Canadian hospital, and only the second in North America – the Johns Hopkins University Hospital opened one about 18 months ago, but the facility at Humber River builds on the U.S. centre and extends the concept further into managing quality.

He explained the system at Humber River gives doctors and administrators the information needed to spot delays and bottlenecks across the site, so they can address these issues quickly and restore patient flow to the desired rates.

Using data feeds from a raft of IT systems around the hospital, including the Meditech EMR, Medworxx bed management system and an Ascom communications system, information is displayed on 16 GE Tiles, each with real-time analytics to synchronize, coordinate and help ensure better outcomes and patient flow.

They include bed management to track bottlenecks, ED admissions and waits, an early warning system to detect patients in distress, and a pathways module that displays what needs to be done to keep patients on track for timely discharge.

Not only is this expected to result in a more efficient hospital, but it will also raise the quality of care and enhance patient satisfaction.

While the technology is leading-edge, the facility also deploys new forms of organization. The Command Centre brings together professionals from different parts of the hospital, so they’re working together in one room.

“We’ve already noticed an improvement in communication,” said Carol Hatcher, a Humber River VP. “Hospitals tend to be siloed into departments, and this breaks down the silos.”

And Dr. Susan Tory, command centre medical director, observed that staff members in the Command Centre have been specially trained to monitor and solve the problems and challenges that emerge. A new role has even been created, that of clinical expediter, to take on tasks that will speed up processes or eliminate problems.

For example, if it’s found that a patient is supposed to have a consult/assessment or diagnostic test, and it is taking longer than it should, the clinical expediter can get involved and help to make it happen faster.

Barb Collins, president and CEO, asserted at the launch event that the Command Centre is aimed at creating the “high reliability hospital.”

She observed the idea for the technologically advanced centre emerged at Humber River 10 years ago, when management visited a Dell Computer command centre. They were impressed at how efficiently the company could operate using the alerts that were generated.

While flying back to Toronto, they realized the airline industry has been using command systems for years to ensure patient safety. “That’s why it’s safe to fly on an airplane,” said Collins. “We thought, that’s what we ought to do with healthcare.”

Soon after, the team at Humber River started talking to GE Healthcare about creating such a system at the hospital, which was planning a new site – now considered North America’s first ‘digital hospital’.

CIO Peter Bak noted in a video produced for the launch that Humber River’s digital systems have already produced a 20 percent increase in efficiency. The Command Centre is expected to achieve another 20 percent productivity gain, which will be like adding 40 more beds without any new costs.

“That’s like adding a small hospital within our hospital,” said Bak.

At a tour of the Command Centre, Andy Day, managing principal, Hospital of the Future at GE, noted that when the new Humber River Hospital opened in 2015, ED visits exploded from 97,000 per year to over 130,000.

That has put special pressure on Humber to manage patient flow and outcomes, starting in the ED.

Day explained the different monitors – called tiles – in the Command Centre, all of which are graphically oriented and colour-coded. These 16 analytic tiles monitor dozens of hospital processes in real time, display visual alerts, and have different teams monitoring them.

The overall hospital bed management system showed the occupied beds on the medical floor running at 104 percent – triggering a red alert. “We have a team working together to see what can be done, to accelerate discharges and balance the house,” said Day.

An ED tile uses feeds and analytics to track visits, ‘door-to-doc’ time, and even multiple visits by patients. For example, it can spot patients who have visited the ED 10 times in a one-month period – the frequent fliers who may be drug addicts, or have other chronic problems. “We want to deal with it, and to find solutions for them,” said Day.

Commenting on the pressure on the Humber River ED, he noted the hospital is experiencing days where 350 to 400 patients visit. “That’s bigger than Mass General,” he said.

As such, paying attention to the ED is of prime importance. The analytics system for the ED is using a 12-stage scale to monitor patient volumes, and has extensive capabilities to spot problems. “It will show you exceptions, too, that must be dealt with,” he said, like patients who are waiting too long to see a doctor or have yet to receive their X-ray or CT scan.

There is a ‘pathways’ tile that ensures patients are receiving all of the care they should be, using various order sets. This ensures quality care and appropriate discharge times.

As well, the Command Centre makes use of an early warning tile, which spots patients with abnormal readings. “An abnormal cardiac enzyme for a non-cardiac patient, or a white blood cell count spike in a post-surgery patient, are indicators that a clinician in the command center can investigate and act on,” said Day.

“By combining alerts from one system with event or patient state information from another system turns data into decision support, allowing intervention before a patient becomes critical.”

It’s been well-publicized that Ontario has a problem with Alternate Level of Care patients – those who are awaiting a place in a nursing home, and are occupying hospital beds. Unfortunately, when nursing home patients go into hospital for more than 30 days, they lose their place in the home and must re-apply.

The Command Centre system has a 30-day countdown, showing the days left for these patients before they lose their place in their nursing home. It’s a reminder to complete all of the care-related tasks needed for discharge, in order to safely return the patient to the long-term care centre.

Not only does the system spot bottlenecks and delays, it can also predict them. The system will use the data that’s compiled each day to learn, for example, when to expect increased patient flow in the ED, the ICU or the operating rooms.