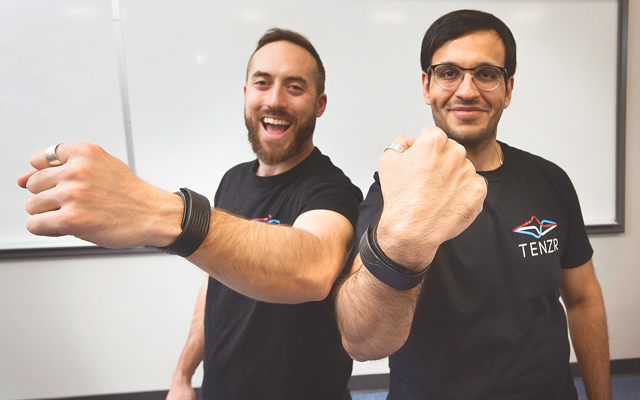 In ancient Roman mythology, the god Janus is depicted as having two faces, one looking forward to the future and one looking back to the past. As the legend goes, he was well suited to presiding over beginnings and periods of transitions.

In today’s fast-moving world of mobile health, researchers and medical graduates coming out of Canadian academic centres are no different, says Dr. Kendall Ho, a professor in the Department of Emergency Medicine at the University of British Columbia and lead of the faculty’s Digital Emergency Medicine unit.

“They are learning what all of the giants before us have done to bring us to where we are, but they also have a way to look forward to identify gaps and challenges that still exist,” said Dr. Ho, who believes it’s prudent to put historical context around future innovation. “As we build a digital culture, it’s important that we not lose sight of history but continue to advance as a profession to support our patients the best way we can.”

UBC’s Digital Emergency Medicine unit is doing just that as it engages medical, pharmacy, nursing and general science students – including international students – to assist on projects aimed at bringing new mobile solutions to the forefront of healthcare. One example is TEC4Home, which is applying remote monitoring technologies to keep heart-failure patients healthier at home after discharge from hospital.

The first phase targeted heart failure patients at Vancouver General Hospital, St. Paul’s Hospital and Kelowna General Hospital. Upon discharge, they were provided with a touchscreen tablet, blood pressure cuff, weight-scale and pulse oximeter, supplied by partner Telus Health. Patients would take their measurements daily for a period of 60 days, and their results were automatically delivered to a web portal for monitoring by a TEC4Home nurse.

Patients were also asked to answer questions about their other HF signs and symptoms, such as shortness of breath, coughing and dizziness. By examining the results daily, the nurse could contact the patient about adjusting medications, visiting his or her family doctor, or going directly to the ED. The nurse could also answer questions from patients and coach them about taking care of themselves.

“Patients can start to measure, to know, to feel, so when they say, ‘I’m dizzy’, they can see their blood pressure or oxygen saturation is dropping and that maybe they should back off from exercise,” said Ho. “They can actually see it in action.”

Early on, the study showed a reduction in the number of hospital readmissions as well as an increase in patient quality of life. Based on those findings, it is now being expanded from 70 to 900 patients within 20 communities, including regional centres like Surrey and Abbotsford as well as smaller, rural communities like Clearwater and Sechelt.

A second TEC4Home project has since launched to provide similar monitoring for COPD patients at Vancouver General Hospital, Richmond Hospital and St. Paul’s Hospital, adding a pedometer to the equipment provided.

Remote monitoring allows healthcare professionals to intervene before a change becomes problematic, by reminding patients to restrict fluids or start a medication, for example. The sensors also help patients to improve their own health management because they start to see correlations between measurements and symptoms, and begin to monitor their conditions on their own, explained Dr. Ho, who calls the sensors “digital mirrors.”

Just as dancers learn how to correct certain moves by dancing in front of a mirror, the wearable sensors help patients to learn and track their own symptoms, he said.

Each Digital Emergency Medicine project draws on the expertise of students in some way, while also providing an opportunity to learn. In the case of TEC4Home, students are involved in collecting and analysing patient data, as well as conducting focus groups to understand how patients and health professionals perceive the technology. An added benefit is the opportunity to observe a patient’s lived experience.

Whereas TEC4Home supports the patient transition from hospital to home, other projects under way within UBC’s Digital Emergency Medicine unit are focused on using smartphone apps and online resources to improve digital health literacy among the general population, including seniors, children in grades four to seven, and multicultural populations.

In Toronto, the first cohort to enrol in OCAD University’s new Master of Design in Design for Health will graduate this year. Intended to fill a gap in the need for health design, and fuel an appetite to find solutions, the first-of-its-kind program attracted 12 students in each of its first two enrolments.

“We realized an enormous potential and need for design in the healthcare sector because challenges are not being met through regular avenues,” said program director Kate Sellen.

The interdisciplinary program has four main themes delivered through studio-based learning: health context; research and application; design and innovation; and, proficiency and leadership within interdisciplinary collaborations. For the most part, partners approach the school with their challenges, but students also work independently in their final year. As Sellen explained, each project provides a blueprint for change that usually involves reorienting their thinking.

One project, for example, looked at fall mitigation at Baycrest, a research and teaching hospital for the elderly in Toronto. Instead of examining the problem through the classic lens of fall prevention, which may include restraints or alarms, students looked at how design choices could improve fall response. The resulting prototype integrates unobtrusive fall detection sensors, embedded into the lighting of resident rooms, with a smartphone app carried by nursing staff.

When a fall occurs, nurses receive more than an alert; they also know whether it was a high impact fall or a slow crumple to the ground, or how long the person has been down, all of which informs the type of response required.

Alison Mulvale is among the first to graduate from OCAD’s Design for Health program. After obtaining her Bachelor of Science in General Sciences from the University of Ottawa and Bachelor of Environmental Design at OCAD, she considered it the “perfect avenue” to blend the two.

For her independent study project, Mulvale is working on an early warning system to detect the possible onset of concussion in sport. The idea sprouted after she sustained a concussion while playing soccer. “I thought I knew everything about concussions until I actually experienced one,” she said.

Drawing on her lived experience, she reached out to the Concussion Legacy Foundation Canada and originally set out to evaluate and redesign concussion training and awareness resources. Then she reframed her thinking. “The really key thing around concussions and awareness that began to emerge wasn’t that concussion in sport happens necessarily, but that there are some pretty serious complications that emerge if they’re not managed early and appropriately,” she said.

The exercise led her to examine how smart sensors and emerging nanotechnology materials might help to form a solution. The result is a prototype that incorporates a smart, tape-like material, capable of detecting force, which can be adhered to the outside of a sports helmet. The idea is that as hits occur during play, the tape changes colour – from green to yellow to red, for example – to indicate when an athlete may have sustained a concussion, enabling them to be removed from play immediately.

“If you’re going to impact concussions, you have to change the conversation,” said Sellen. “Alison started to look at the moment of concussion and the motivators for actually changing behaviour and that’s what led to this proposal with the helmet stickers.”

Many of the projects under way in the program are designed for not-for-profit clinical environments where research and development resources are limited. There’s no push to commercialize, but designs are often leveraged by other companies performing similar work, or further developed using government funds secured by the partner.

One student, for example, is working with the Schizophrenia Society of Canada’s Youth Advisory Council to create a peer navigation app, intended to facilitate a more positive experience for youth with Schizophrenia through texting. Another project, led by Sellen, is developing an integrated digital strategy to provide easily accessible and brief first aid training to accompany naloxone kits used to treat opioid overdose. Randomized controlled trials of the digital training, available as a smartphone app, are scheduled to start at St. Michael’s Hospital in Toronto.

At a time when mobile health apps are so pervasive, two Simon Fraser University (SFU) alumni have found a way to stand out from the rest by focusing on a next-generation, human-machine interface: wrist movement. Biomedical engineers Lukas-Karim Merhi and Gautam Sadarangani started to work with gesture recognition technology during their tenure as researchers at SFU.

They’ve since partnered with industry veteran and medical doctor Jose Fernandez to launch BioInteractive Technologies (BIT) and to develop a proprietary platform that accurately detects hand postures. Their flagship product is TENZR, a wearable wristband that detects six gestures out of the box: hand open, hand closed, up, down, left and right.

The product can be used to control medical equipment in operating rooms, complex robotic systems or mixed reality environments through gestures. It can also be applied to accurately monitor how people are using their hands.

TENZR is currently being evaluated by a lower mainland hospital as a tool to assist in stroke rehabilitation. Essentially, the product is a smart strap, using sensors embedded along its entire length to measure tendon and muscle movement without the need for calibration or any external beacons and cameras.

“The clinicians are interested in using the device to tell the number of times that a stroke survivor opens and closes their hand in a day,” explained Sadarangani, who serves as the company’s chief technology officer, with Merhi and Fernandez taking on roles of chief executive officer and chief operating officer respectively.

“The premise is to encourage patients to move more or be more aware of days when they’re not moving and to relay that information back to the primary care physician so they can intervene,” he said, adding that up until now, that type of information was typically self-reported by patients.

TENZR is also well poised to play a role in the emerging world of ubiquitous spatial computing, where shared reality environments are emerging to solve challenges related to pain management, rehabilitation, surgical simulations and clinician training.

“Imagine that these digital assets you’re looking at are all around you in 3D, and you’re interacting with those assets, using your hands in the same way you interact with physical objects today,” said Merhi.

BioInteractive Technologies is currently based out of SFU’s Surrey, B.C., campus as an incubator client of Coast Capital Savings Venture Connection. Recently, the company was selected to take part in the Techstars Anywhere program, which provides access to hands-on mentorship, funding and lifelong access to the Techstars Network, one of North America’s biggest start-up accelerators.

As their company marches steadily forward, the support of their alma mater is not lost on the two alumni.

“SFU prepared us for the challenges we took on beyond grad school,” said Sadarangani. “Coast Capital Savings Venture Connection is bridging the gap between when an idea is in a founder’s head and those first few crucial months to get things started.”