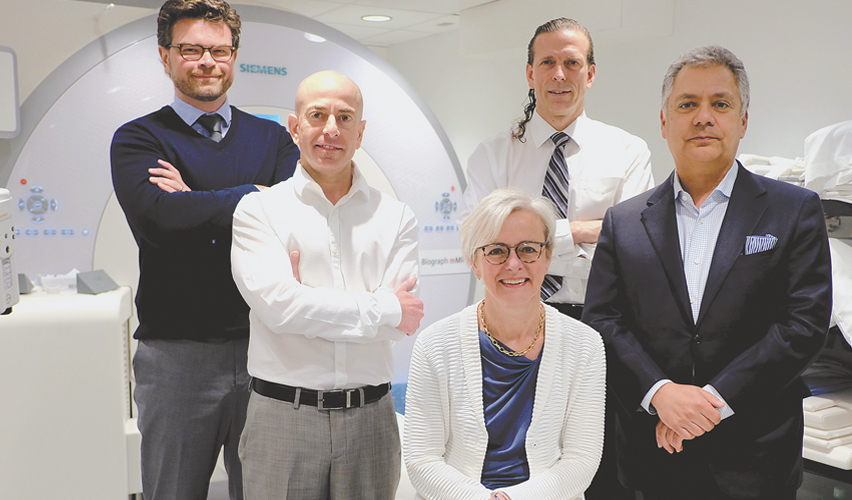 TORONTO – A PET/MR scanner, installed in the basement of the Toronto General Hospital, is a rare imaging commodity in Canada – there are only three other machines of this sort that are operational across the country. Even though the system in Toronto is for experimental purposes, it has already started to provide astounding clinical benefits.

In trials with patients, the PET/MR scanner has been able to find very small tumours, which flash on the display screen like hotspots.

“We see metastases that are sometimes two or three millimetres in diameter,” said Dr. Ur Metser, Head of Molecular Imaging at Toronto’s Joint Department of Medical Imaging. “There is no way we’d be able to see them otherwise. We’re really pushing the envelope on what we can see and what we can treat.”

Indeed, using this information, a surgeon was able to remove the cancerous tissue in a patient with prostate cancer- at an early stage, before it had spread.

PET/MR scanning is considered to be an emerging gold standard for many types of imaging. Positron emission tomography (PET), also known as molecular scanning, uses radioactive tracers to spot problems like fast-growing tumours and damaged tissues, as well as new vascular formations or bone growth.

However, the flashes captured by PET appear on a blank screen. Without some sort of map, it would be impossible to determine where the lesions are located. That’s where MR comes in: magnetic resonance imaging (MRI) is used to create an accurate map of the body, so the hot-spots that are identified are placed into their proper anatomical context.

The two pictures are then fused, creating a hybrid mix of functional imaging (using PET) and anatomical (MR) scanning.

For its part, the Joint Department of Medical Imaging (JDMI) – which comprises the University Health Network (UHN), Sinai Health System (SHS) and Women’s College Hospital (WCH) in Toronto – has launched an active research and development program for the PET/MR scanner. Researchers and clinicians aim to create breakthroughs not only in imaging, but in the treatment of diseases.

For example, one project intends to combine PET/MR scanning with image-guided therapy. The PET/MR will be used to identify the tiniest of tumours. It will then be connected to powerful, radiation-beam machines to destroy the lesions.

“The idea is that we’re able to localize these small, targeted lesions, that are two or three millimetres in diameter, and go in and hit them with an MRI-guided radiation machine,” said Dr. David Jaffray, UHN’s Executive VP, Technology and Innovation.

“That’s an emerging paradigm that will drive a lot of innovation in molecular imaging. It’s tied to minimally invasive therapy, which is an emerging thread in healthcare.”

This form of therapy, using image-guidance, can be far more precise than traditional surgery – where surgeons make incisions in the patient and remove damaged tissues. As well, it has no blood loss, comes with far less chance of infection, and recovery times for patients are much faster.

The JDMI acquired its Siemens Biograph PET/MR scanner in 2016, but the program didn’t really take off until a year later, when Dr. Patrick Veit-Haibach was recruited from Zurich, Switzerland. Dr. Veit-Haibach headed a similar program at the University of Zurich and is an expert in the technology.

Since arriving in Toronto, he has been working with researchers and clinicians at the JDMI to get new studies and programs up and running.

In addition to PET/MR for prostate and oncology, he is coordinating programs in cardiovascular diseases and neurology. Soon, organ transplant studies will be added.

Dr. Veit-Haibach observed that there are about 160 PET/MR scanners sold worldwide. But something unique in Toronto is the co-location of a cyclotron – which is needed to produce the radioactive tracers – and a radiopharmacy, which is designed to process radioactive tracers produced by the cyclotron in a room just beside the scanner.

This means tracers with very short half-lives can be created and used in the MR/PET unit – another area of innovation that’s in the works.

A robust research program has also been launched for cardiology. In fact, the whole PET/MR project got its start at UHN through the efforts of a cardiologist, Dr. Harry Rakowski, and a radiologist, Dr. Walter Kucharczyk, about 10 years ago. Since then, a $20 million investment by the hospital, the Canada Foundation for Innovation, and donors has brought the program to fruition.

“This is a very hot research idea, and you can only investigate it with this kind of technology,” said Dr. Barry Rubin, Medical Director at the Peter Munk Cardiac Centre. “It’s important, because these diseases affect millions of people. If it turns out that there is an association, then you have to wonder, would targeting atherosclerosis at an earlier age reduce the incidence of organic brain disease? So that’s a very big question, with major public health implications.”

He said the research project is being conducted in association with Baycrest, in Toronto, and with Northwestern University, in Chicago.

Indeed, most of the projects underway are being run in conjunction with partners across Canada and internationally.

“This is the new way of doing research. It’s much more collaborative than before,” said Dr. Jaffray. He explained that most PET/MR sites have a relatively low patient volume. After all, it’s an intricate exam that requires the use of radiopharmaceuticals. The JDMI, for example, is imaging three or four patients per day in its PET/MR scanner but expect patient volume to expand as new studies kick off.

By collaborating with partners, however, one can examine a higher number of results. “We can get a larger number of patients this way, and better statistics,” he said.

One of the prostate studies is in partnership with 10 centres internationally, with work being conducted in Australia, Canada and the United Kingdom.

Of course, PET/MR is a relatively new imaging modality and there are still challenges to be overcome.

One issue has to do with the registration of images – matching the pictures collected by the PET scanner with those of the MR.

Dr. Metser observed that MR imaging has traditionally been done for particular regions of the body, heart, liver, joints, for example – not usually as a whole-body imaging tool. But PET imaging is very useful for whole-body scanning, to determine if a tumour has metastasized.

To map this accurately, MR protocols have had to be developed that work for whole-body scanning, too. To its credit, the JDMI has just completed work in this area.

“Basically, we developed a protocol for whole body imaging for prostate cancer,” said Dr. Metser. “It was just published in the American Journal of Radiology. Most MR scans are done for specific locations; you do MR for the prostate, for the liver, for the heart; but MR is not usually used as a whole-body imaging modality.

It should be noted that PET has also been fused with CT scanners. But PET/MR has some definite advantages. For one thing, it’s more difficult to precisely register CT and PET images, since the PET scan can take 15 to 18 minutes and a CT can be done in 30 seconds.

In that time, organs like the bladder will shift, and will move adjacent structures. As a result, the positioning of a tumour may not be accurate when images from the two modalities are fused. But MRI can be performed in tandem with the PET scan, over the course of the 15 to 18-minute exam, so the fusing of images is far more accurate. What’s more, MR is often better for soft structures like the heart and brain. Said Dr. Heidi Schmidt, Interim Radiologist-in-Chief at the JDMI. “In many areas, MR has higher soft-tissue definition than CT. So to the extent that you get better information out of an MR, you get better information out of a PET/MR.”