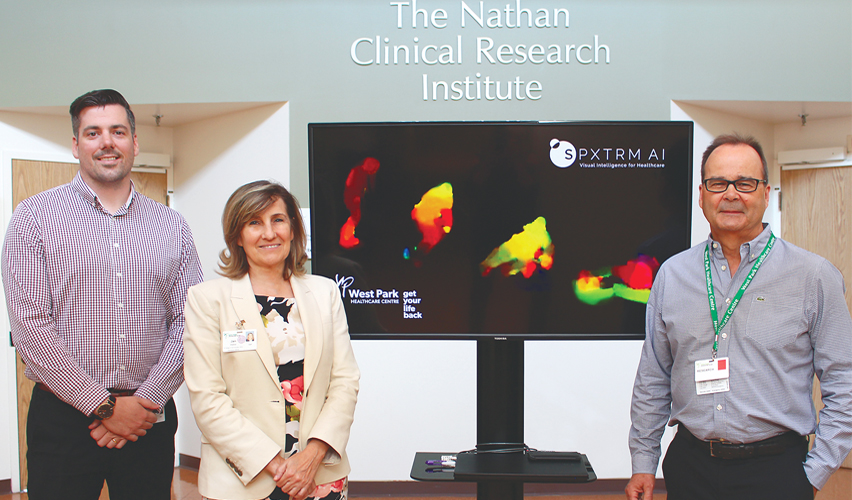 The system – which makes use of video cameras placed in strategic spots in the hospital – employs artificial intelligence to detect signs of aggression. It then connects to the nurse call and alerting system to send for help in instances of conflict, potentially saving staff and other patients from injuries.

The problem it solves is that there’s usually not enough staff in hospitals and long-term care facilities to adequately monitor potentially aggressive patients.

In some cases, this lack of resources prevents patients moving from ALC beds in hospitals to nursing homes and other facilities, as there aren’t enough resources to care for them. That, in turn, creates logjams in the acute care centres.

“Many hospitals and long-term care centres have patients with behavioural issues,” said Jan Walker, VP, Strategy, Innovation and CIO at West Park. “What we’re creating here will have benefits for all kinds of facilities, as well.”

These residents require quite a bit of attention – staffing for this group is normally one-to-one, and sometimes two staff members for a patient. Moreover, the patients can be challenging.

“They can be quite an aggressive population,” explained Walker. They may have suffered a brain injury from a road or boating accident, and when they become upset or angry, they can be difficult to control.

It’s difficult to have adequate staff keeping an eye on them around the clock.

So, when it was suggested that today’s AI technology is capable of monitoring patients like these, Walker and the team at West Park were extremely supportive.

On a related note, West Park is about to embark on a renewal and expansion– it’s constructing a new building on its 27-acre campus to replace older structures that date back 50 years or more. And it intends to incorporate the latest innovations in technology to help achieve the highest medical outcomes for its patients.

To do that, said Walker, it is creating joint ventures with innovative companies like Spxtrm AI. Other areas in which West Park has formed partnerships include 3D printing, for prosthetics, and smart textiles.

In this instance, “We’re actively looking at ways to reduce aggressive behaviour,” said Walker. “We brought Spxtrm AI in, so they could contribute.”

Indeed, Spxtrm AI has set up shop at the hospital so that it can not only devise a solution right on the premises, but so it can also readily draw on the expertise of West Park’s clinicians and IT staff. “They’ve provided us with a development sandbox,” said Jay Couse, co-founder and CEO of Spxtrm AI. “We can develop the solution four times faster here than we could in a lab.”

Meetings are held with West Park staff every two weeks to discuss progress and work out solutions to new challenges. And by being embedded right into the West Park campus, there’s a constant flow of information to the developers. “It’s the water cooler effect,” said Couse, explaining that even informal discussions can have an enormous impact on the solution.

Couse leads the project as the “entrepreneur-in-residence”. The company also has a computer vision expert and Spxtrm AI Co-Founder on site at West Park guiding the application development, along with two other staff members. As well, an AI team in Edmonton is also working on the project.

The company and West Park were awarded a $75,000 grant from the Ontario Centres of Excellence, to which they have contributed matching funds and resources. Couse said Spxtrm AI will raise additional development funds from private investors.

Both Couse and Walker emphasized that patients and their families have provided full consent for the research project, and that a formal privacy impact assessment was conducted. The team even met with the Ontario Privacy Commissioner’s office to ensure it was compliant with the rules and regulations.

As well, over 99 percent of the autonomously monitored video that is ingested by the AI system is discarded immediately; the less than 1 percent of the images that remain – consisting of the incidents of aggressive behaviour or other aberrant conditions, such as falls – are securely stored in a blurred, redacted format for a minimum period of time to allow for professional staff review. It’s all designed to protect the identities of the patients.

Couse noted that West Park already has cameras mounted throughout the Acquired Brain Injury Behavioural Services unit. The problem has been that it’s difficult for humans to monitor the video feeds 24 hours a day. “Very quickly, there’s a 98 percent drop-off in attention after 20 minutes when people are monitoring video screens,” said Couse.

However, by using machine learning, computers can be taught to detect signs of aggression and to alert the appropriate staff. And of course, computers never get tired.

How does a computer detect aggressive behaviour? What is it looking for? Couse noted that machines can be trained to recognize certain types of motions that signify violence or pre-cursors to violence. “As well, loud noises may set off certain patients, and some patients may be annoyed by the actions of certain people,” said Couse. “This can all be built into the algorithms.”