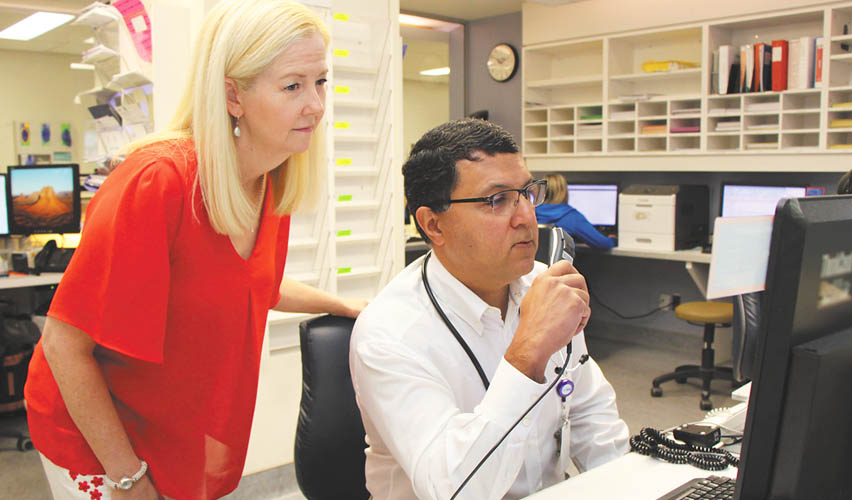 Providers can now open a patient’s chart and simply dictate their notes, make edits, sign off and finalize their notes in one workflow. Recipients of the notes, such as other consultants or primary care providers, also get timely access to these important communications.

Dictation isn’t entirely new to SickKids. Providers have been using back-end dictation software at SickKids for the past 12 years.

The process would start with the provider picking up a phone and dialing the number for the dictation service. After selecting a few different options, they would then speak into the phone to record their note, just as if they were leaving a voice mail message.

The audio message would then be sent back to the provider to edit and sign off before being transcribed. This process could end up taking days to weeks.

Furthermore, with the ability to use Epic’s mobile apps to access the patient chart remotely, and M*Modal’s microphone mobile application, providers can use their smartphones to dictate anytime, anywhere.

“Front-end dictation is a feature that we were really excited to introduce to SickKids and it has been wildly successful,” says Dr. Karim Jessa, Chief Medical Information Officer.

“To be able to dictate your notes directly into Epic, make your edits and sign off on those notes in one workflow is very helpful, particularly in our outpatient clinics,” says Dr. Jessa. “Our frontline providers have commented on how accurate and quick the system is.”

SickKids invested in over 600 remote microphones, strategically placed in inpatient areas and outpatient clinics and some providers’ offices. Gone are the days of paper documentation and calling in to record a note for transcription.

The ability to watch the words appear on the screen is not only impressive but much more efficient and productive. While SickKids launched M*Modal to be used with Epic, the M*Modal application can also be used with other applications, like e-mail.

Front-end dictation is not only saving time for physicians, but also for the other members of the care team who add notes to the charts.

Joanne Bignell, Nurse Practitioner at SickKids, says, “I used to take handwritten notes and spent a lot of time typing out my detailed documentation. Now I can speak into my microphone or iPhone and as soon as I finish speaking it is saved into the patient’s chart, available immediately for other clinicians who require access.”

Not only does the tool document word-for-word what the provider says, it also allows for the provider to customize commands.

For example, if a physician often says the same phrase, perhaps a description of a diagnosis, they can program M*Modal so that they only need to say “insert ‘x’ diagnosis” and it will automatically pull a pre-determined phrase.

Abbreviations can also be set to type out the entire word or phrase.

The microphone hardware allows for additional commands, beyond the verbal commands already mentioned. Many providers choose to program the rewind button on the remote to mimic the “ctrl-z” function, which will undo the last word they said.

The success of M*Modal hinges on users training their profile. While the tool will work right out of the box, it will get better and better over time, as the user speaks. That’s because the application learns their voices and adapts to their surroundings.

For example, if the provider always dictates in a noisy area, the more they dictate in that location, the better the application will be at picking up their words.

“We are only just scratching the surface with what’s possible with front-end dictation and Epic, “says Dr. Jessa. “We look forward to using the tool to provide physician feedback on ICD-10 codes, gaps in documentation quality, variance in patient care, best practices and more. We also plan to introduce more advanced features, like creating macros in order to decrease mouse clicks.”

“It is an honour to be able to partner with SickKids as they are a leading world class hospital and teaching facility,” says Carey Silverstein, VP of Operations for M*Modal Canada. “This was a very large project for M*Modal Canada, as the decision was made to go live with Epic, Fluency Direct (our front end speech application) and Fluency for Transcription, (our transcription platform with back end speech recognition) at the same time.

Silverstein noted that since the go-live, physicians are rarely picking up a phone and dictating their reports to be transcribed or edited, as was done in the past.

Between the combination of Epic and Fluency Direct, all physicians, as well as a multitude of other hospital staff, are now documenting directly into Epic without the need for transcription services.

“This change in documentation is not only saving SickKids significant money but is also allowing hospital providers to document at the point of care and immediately have their patient reporting available in Epic,” he said.

Paul Silverstein, VP of Finance for M*Modal Canada, notes that the success of this project between SickKids and M*Modal Canada is due to a solid partnership. “The next phase of the project is the launch of the M*Modal CDI or Clinical Documentation Improvement technology. The M*Modal CDI will be utilized at the time of dictation for their physician group, which will improve both clinical documentation and help their coding department.”