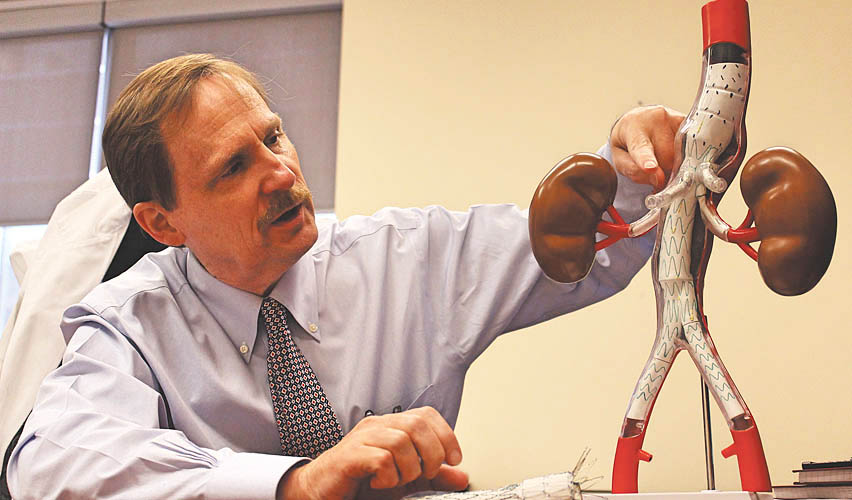 Dr. Thomas Lindsay, a vascular surgeon at the University Health Network’s Peter Munk Cardiac Centre, demonstrates how a long graft can be inserted into the aorta of a patient, with branches for the kidneys. The innovative, team-based procedure is performed using minimally invasive methods, all through a small incision rather than open surgery. It reduces trauma to the patient and speeds up recovery times.

Thomas York points at the tiny scar on his left shoulder. The cut of less than one centimetre made way for a sophisticated procedure that restored his peace of mind.

“I was walking around with a bomb in my chest that could blow up at any time,” he says.

At 71 years of age, Thomas was living for the past five with an aortic aneurysm. The repair to this condition is one of the most complex and delicate procedures in vascular care. And, in York’s case it was also a remarkable achievement of minimally invasive technique in Canada.

A silent and often fatal disease, an aortic aneurysm is an enlargement of this major artery that carries blood from the heart to the rest of the body. An aneurysm usually causes no symptoms, but it weakens the wall of the aorta which can lead to a sudden rupture and massive internal bleeding.

York’s “bomb” was disarmed by a surgery called endovascular thoraco-abdominal aneurysm repair. Surgeons from the Peter Munk Cardiac Centre (PMCC), UHN, inserted a custom-made graft that has branches for his bowel and kidney arteries in his aorta.

This graft is a flexible synthetic tube that basically works as a new aorta in the area that is enlarged. The branches are then attached to the four bowel and kidney arteries with short bridging grafts inserted from above – through an artery under the collar bone.

His surgery is believed to be the first totally percutaneous aneurysm repair in Canada for this specific type of aneurysm. Thomas had a thoraco-abdominal aneurysm, which stretches from the chest all the way down to the lower abdomen.

“I woke up with this tiny cut and it’s just like magic,” says York. “I could hardly believe the surgery was done. It really blew my mind that they could do something with this level of precision like this.”

After witnessing the evolution of vascular repair from open surgery to a state-of-the-art minimally invasive procedure like this over the last two decades, Dr. Lindsay says he can barely believe how far medicine has come.

“My generation, we were trained to do repairs for this type of aneurysm in open surgery,” says Dr. Lindsay. “Something like this was a pipe dream when I was training.”

Today, that dream is very real and requires a lot of engineering, technology and teamwork to put together.

The graft is custom-made for each patient, designed in the United States and produced in Australia. In the OR, you have a highly specialized team of surgeons, anaesthetists, radiologists, nurses, radiologist technicians, spinal cord technicians – all trained to do a very precise job.

The tube comes in collapsed, and it really takes a talented team to get it in the right position and have each branch open at the exact location – and all through that small cut.

Such an effort allows for a decline in risk of mortality and of complications like paralysis or kidney failure. It also allows for faster and safer recovery.

“In the past I thought we could never achieve something like this,” says Dr. Lindsay. “These advances in medicine are all about moving the needle forward to cause less trauma to the patient and hopefully achieve better outcomes.”

In York’s case, the minimally invasive procedure allowed him to leave the hospital only seven days after his surgery. He’s now back in his hometown, Belleville, Ont., enjoying a second lease on life with his wife, son and grandchildren.

“Now that this load is literally off my chest, I feel like I can do anything. And I still have lots to do,” he says.