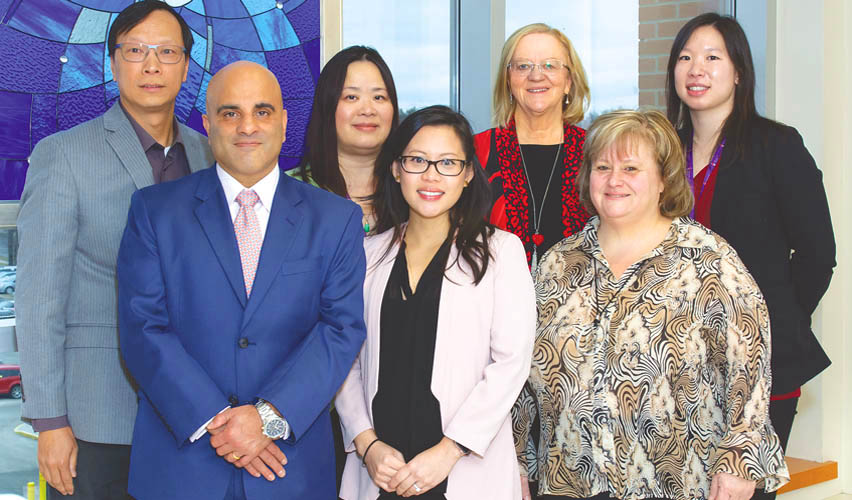 RICHMOND HILL, ONT. – In November, Mackenzie Health announced that it had become the first acute-care hospital in Canada to achieve Stage 7 on the HIMSS EMRAM scale. Stage 7 is the highest rung on a ladder that measures end-user adoption of electronic medical record (EMR) functions.

And while several Canadian hospitals have made it to Stage 6, it’s a big jump to Stage 7. “To get to seven, it’s a completely different story,” asserted Richard Tam, Executive Vice President & Chief Administration Officer at Mackenzie Health.

To qualify for EMRAM Stage 6, a hospital must implement advanced systems like computerized provider order entry (CPOE) and closed-loop medication management. But a hospital must only demonstrate limited use of these systems, and the process of qualification is done over the phone.

By contrast, EMRAM Stage 7 involves a full-day site visit and evaluation by officials from HIMSS. They thoroughly check to see that electronic records, CPOE and closed-loop medical management are used throughout the healthcare organization.

“It must be an enterprise-wide implementation,” said Tam.

During the site visit, the HIMSS evaluation team visits various units and departments of the hospital and checks on how computerized systems are deployed and used in day-to-day work. They will also randomly stop staff – including doctors, nurses and pharmacists – in the hallways and assess how they are using these advanced systems.

“It’s similar to Accreditation Canada,” said Tam. “They will talk to anyone they run into in the hospital.”

He added that an EMRAM Stage 7 hospital must also submit three case studies, showing how advanced systems have improved clinical, business or financial outcomes within the hospital. And the results must be based on at least 12 months of data.

“They asked for three case studies, but we submitted five,” noted Tam.

For example, the hospital showed the impact of its electronic systems on length of stay (LOS) for COPD (Chronic Obstructive Pulmonary Disease) patients. Tam said the hospital has reduced the LOS for these patients by 2.2 days, resulting in financial gains of about $205,000 for the year.

In July 2017, Mackenzie Health went live with its implementation of the Epic Systems electronic medical record (EMR). Shortly after that, it achieved the EMRAM Stage 6 certification, and achieved EMRAM Stage 7 in just 16 months.

The Epic EMR has been implemented in every part of the hospital, including the Emergency Department (ED), surgical and operating rooms, medicine, long-term care and mental health.

Tam noted that while there are other Canadian hospitals using Epic, Mackenzie Health was the first hospital to have an integrated end-to-end Epic system in all areas of the hospital. Moreover, Mackenzie Health went live with the system all at once. “We chose the big bang rollout,” he said. “Everyone had access at the same time.”

This has had a dramatic effect on efficiency, as well as on patient safety and quality. It has also reduced delays in patient care.

“For example, when you have a patient in the ED or the fracture clinic. As soon as the consult is done, and the physician writes the note in Epic, everyone on that patient’s treatment team can see what was diagnosed and ordered,” said Tam. This allows treatment to begin immediately.

The single-view of patient encounters in all parts of the hospital has also contributed to teamwork, as all clinicians can instantly see relevant clinical information and easily collaborate.

Tam emphasized that the EMR project has always been clinically led, and many of the workflows have been developed and implemented with the direct involvement of doctors, nurses and allied professionals. Indeed, many meetings were held with clinical teams to design the system well before it was tested and implemented.

Mackenzie Health’s Epic EMR project has been led by Dr. Stephen Jackson, Dr. Aviv Gladman and Dr. Victoria Chan. As well, every area of the hospital has its own specialty physician-champion.

“IT has been a support service,” said Tam. “The clinicians have really taken a primary role to run the project.”

Buy-in to the project has been so high that Mackenzie Health has one of the highest number of “physician builders” of any Epic hospital in North America. “Physician-builder” is an Epic designation that requires doctors to be trained by Epic and to pass two levels of exams.

Given the complexity of the system, all staff and physicians must be trained in order to gain access.

“It’s like driving a car,” said Tam. “If you’re not trained on how to drive the car and operate it safely, you don’t want to give someone the keys.”

Using the system may mean that if you are a physician, you are ordering medications, and if you are a nurse, you are charting and administering the medications to the patient. These are life-changing tasks. “So, when it comes to working here, we’ve set the bar quite high, for all professions,” said Tam.

On the medication management front, noted Tam, Mackenzie Health needed to demonstrate that the closed-loop barcode-enabled technology administration had 95 percent compliance to qualify for the EMRAM Stage 7 designation.

That means the system must be consistently used by clinicians to ensure that the right medications are administered to the right patient, everywhere within the hospital – from the ED, to the medical floors and ORs.

Furthermore, additional EMRAM Stage 7 requirements include the use of barcode technology utilization for human product administration such as blood products (across the entire hospital) and human milk in the Neo-natal Intensive Care Unit (NICU).

Tam says the medication management system has contributed considerably to improved patient safety. By having to scan the medication and the patient armband, “the likelihood of medication errors is drastically reduced,” said Tam. “The system will give the nurse a very strong alert [in the event of any error in medication administration process].”

The notes automatically become part of the patient’s record.

While Epic has been installed end-to-end, there are still legacy systems in operation at the hospital.

Indeed, Tam said, at the Epic launch, up to 90 legacy systems were in use, and were integrated into the Epic EMR through the use of interfaces. Since then, the hospital has consolidated these systems to 26, and an effort continues to reduce this number.

The plan is for continual improvements at both sites. “We’ve now got the platform to do this,” said Diane Salois-Swallow, Chief Information Officer at Mackenzie Health.