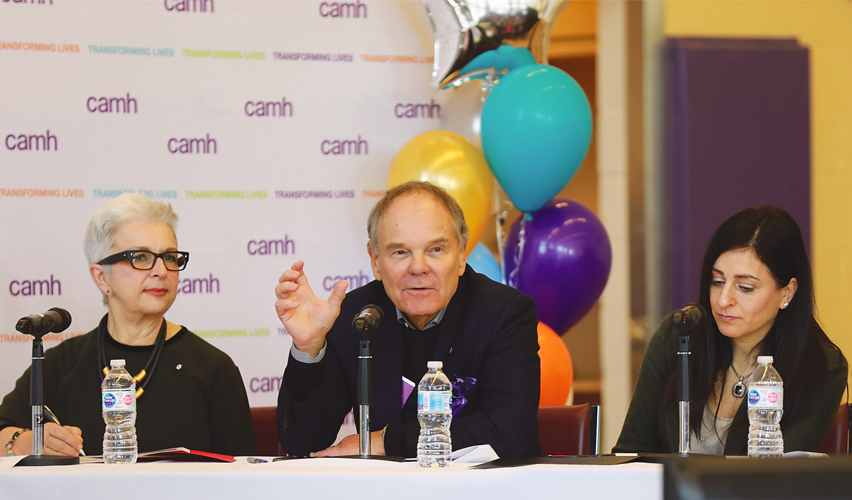 Innovation teams at CAMH make their cases to ‘Dragons’

Don Tapscott is in. At a recent pitch session for innovation projects at Toronto’s Centre for Addiction and Mental Health (CAMH) – modeled after popular CBC TV series Dragon’s Den, where entrepreneurs compete for investment cash from financiers – Tapscott the Dragon offered up his own cash for one proposal.

“Don’t the Dragons get to buy in (on the TV show)? I’ll give you $10,000,” Tapscott told a group of presenters during the afternoon session of CAMH’s Innovation Expo in February.

The panel chose HOPE, an individualized suicide safety plan app, to receive a funding request of $35,000.

The app was proposed by CAMH director of quality innovation for patient safety and experience Nicole Thomson, operations manager Tim Rankin, and IT specialist Gurpal Bubbra.

Future phases of the app would incorporate mood and medication trackers, machine learning technologies, and deeper integration with CAMH’s operational systems. The team envisions a resource that can be shared among patients, families and therapists.

“I think you guys are going to make a huge difference. You’ve also got a lot of work to do,” Dagher said. “You should have asked for more money.”

CAMH Innovation Expo attendees voted Data That Heals, a project that would leverage existing technology with $100,000 in hardware to bring personalized analytics to the inpatient bedside, as the People’s Choice award winner. The proposal’s slick and humorous presentation came from behaviour therapists Louis Busch and Mahfuz Hassan and senior business analyst John Fernandes.

Senior management at CAMH will pitch in to help develop the business cases for the implementation of HOPE and Data That Heals.

Take My Photo – the proposal that Tapscott offered to fund – may have won on a different level. The project would bring professional photography standards to a once-a-year shoot to replace patient admission photos, often taken when people are distressed and dishevelled, with poor lighting and image quality.

That image can influence a clinician who views it as a chart picture, and the public if a photo must be released of a missing patient, said team spokesperson Zeynab Hassan, a clinical informatics nurse. Project analysts Matthew Jabile and Kevin Leung were also on the team.

The photos would integrate with the patient’s “This Is Me” page which provides more detailed personal information in I-CARE – CAMH’s electronic health record.

The “This Is Me” page that Take My Photo was to integrate with was a product of last year’s event.

But innovation doesn’t work best in a silo, so CAMH opened the competition to ideas from management, clinicians and operations management as well.

Jankowicz, who hosted a morning panel on the challenges of innovation in healthcare, said while ideas may be plentiful, they often aren’t brought to the fore. Instead, we “stew in our own juices.”

“We don’t always progress and implement our ideas,” he said. “Today, I’m hoping we can close some of those gaps.”

In fact, “pilot purgatory” is a frequent issue for innovation, said panellist Liam Kaufman, founder and CEO of Winterlight Labs, whose AI-based technology can detect cognitive impairment from a few lines of speech.

People are too comfortable with incumbent processes and technologies for incremental improvements and efficiencies to get user buy-in, he said.

“We have to think way bigger in terms of what we can do,” concurred Shivani Goyal, lead of strategy and research at eHealth Innovation at Toronto’s University Health Network.