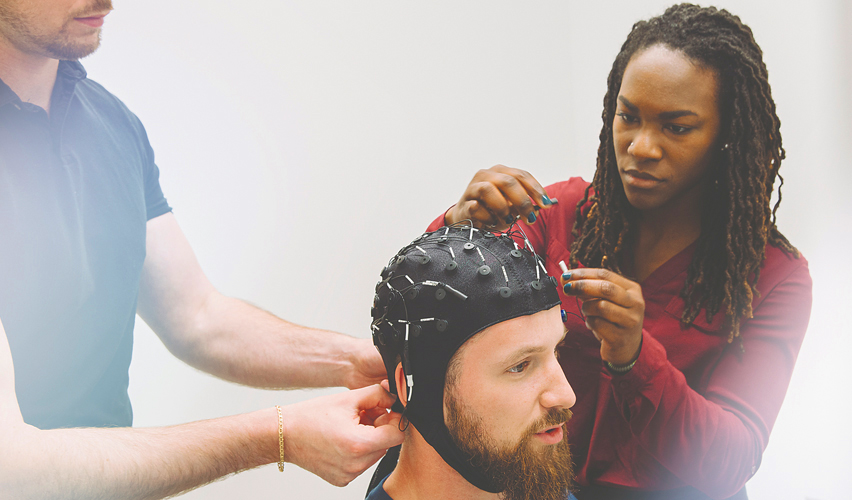 HAMILTON, ONT. – A McMaster University spin-out company, called VoxNeuro, has produced technology that allows clinicians to precisely gauge the level of brain activity in persons who have suffered head injuries – such as concussions – or those who have experienced a cognitive decline, including the elderly.

Using EEG technology that’s coupled with new proprietary algorithms for interpreting the data, VoxNeuro allows patients to be tested, non-invasively, in a matter of an hour, as opposed to the traditional form of testing that can take three days.

Moreover, the testing accurately pinpoints which functional areas of the brain are normal, and which are showing deficiencies. These functional areas include working memory, automatic attention, reactive attention, language comprehension and executive function – all of which can affect a person’s day-to-day behaviour.

The EEG-based testing contrasts with current methods of assessing patients with brain injuries for cognitive functioning, where a clinician sits with the patient, asks questions and subjectively scores the responses.

“Up to 43 percent of the patients whose brain functioning is assessed after a head injury walk out of the hospital with the wrong diagnosis,” said Dr. John F. Connolly, co-founder of VoxNeuro and director of the Centre for Advanced Research in Experimental & Applied Linguistics (ARiEAL) at McMaster University.

He is also co-director of the centre’s Language, Memory & Brain Lab, and is the creator of the patented assessment and much of the methodology that’s at the heart of VoxNeuro’s approach.

By objectively assessing brain function, and by evaluating the activity in various regions of the brain, patients can be quickly directed into more useful forms of rehab therapy.

“Instead of trying eight forms of therapy to see what works, we can tell rehab clinicians that, ‘These are the areas you need to focus on’,” said James Connolly, co-founder and CEO of VoxNeuro. “Instead of guessing what might work, we can tell them what will accelerate recovery.”

VoxNeuro brings scientific testing, diagnosis and treatment planning to the exercise, instead of guesswork and trial-and-error.

He noted the information leads to better patient outcomes and reduced costs, as less time is needed for the patient to recover or progress.

James Connolly is the son of Dr. John F. Connolly, and as a former corporate executive with experience in business development in Canada and the United States, James is leading the commercialization of the technology along with COO and co-founder, Kimberly Elliott. He serves as CEO of VoxNeuro.

Also guiding the company is Sam Chebib, who serves as chairman and Chief Strategist. Previously, Chebib was the CEO of Toronto-based Nightingale Informatix, a leading developer of electronic medical records for physicians in Canada and the United States. The company was purchased by Telus Health, which has been integrating the technology into its own EMR system.

VoxNeuro was formally launched in 2017 and makes use of 25-years worth of peer-reviewed, globally funded research. Its flagship assessment centre is located at McMaster University, where VoxNeuro is currently accepting patients, and has offices at the IBM Innovation Space in Hamilton, Ont.

It is also providing clinical services and conducting original research within ARiEAL, a research centre with multiple active studies in concussion. For example, a research project in the centre is currently assessing members of the McMaster University football team for signs of cognitive damage that may have been suffered in past concussions.

It intends to reassess football players who experience concussions during the current season; it will also assess all the players after the season ends.

Dr. Connolly and his team are at the forefront of research into the effects of concussions on athletes – something that has been gaining attention in recent years but is still not fully understood. “Concussion is complicated,” said Dr. Rober Boshra, Director of AI & Technology at VoxNeuro.

“Athletes who suffer concussions may feel okay after a few weeks, but sometimes they’re really not,” he said. The functional EEG testing can accurately determine if they’ve suffered damage to various areas of brain function.

Moreover, said Dr. Boshra, “If they get hit again, it can be a lot more traumatic.”

In addition to sports injuries, concussions can be suffered in car accidents, falls, and other incidents. A recent study by the Toronto Rehab Institute estimates there are 150,000 concussions a year in Ontario alone. “That’s what people thought was the figure for all of Canada,” said Dr. Connolly, noting the incidence of concussion has been greatly underestimated.

Researchers are now starting to link abnormal behaviour in some persons to concussions they have suffered – both recently and in their pasts. “Some people don’t fully recover,” said Dr. Connolly.

EEG is sometimes used in hospitals to test patients for brain function and activity. However, the tests are largely performed while the patient is in a “resting state”. That is, he or she isn’t performing any mental or intellectual tasks.

By contrast, VoxNeuro’s technology takes the patient through a series of words, images and tasks and asks him or her to respond. By measuring the “active” responses, or lack of them, VoxNeuro can accurately determine which areas of brain function have been injured or is malfunctioning.

The tests are done with electrodes attached to the patient’s head, using a cap. The leads pick up levels of electrical activity in the brain while patients are looking at a computer screen and responding to images and sounds. The data are collected and analyzed by computer technology; reports can be turned around and delivered to attending clinicians within 48 hours.

Already, VoxNeuro’s technology is being used by St. Joseph’s Hospital, Hamilton. The Sports & Exercise Institute in Toronto will be launching a Toronto-based assessment centre later this year, and nationally, Bayshore Therapy & Rehab is using it to build out their concussion program.

In the near future, VoxNeuro will be adding cloud-based AI processing to the analysis. As it collects more data, the company will devise a system that can detect abnormalities with even greater degrees of granularity; it will be able to indicate which rehab activities will be more effective in a particular patient, with a greater amount of precision. “We may even be able to predict who is at risk of various problems in the future, by analyzing the data,” said Dr. Boshra.