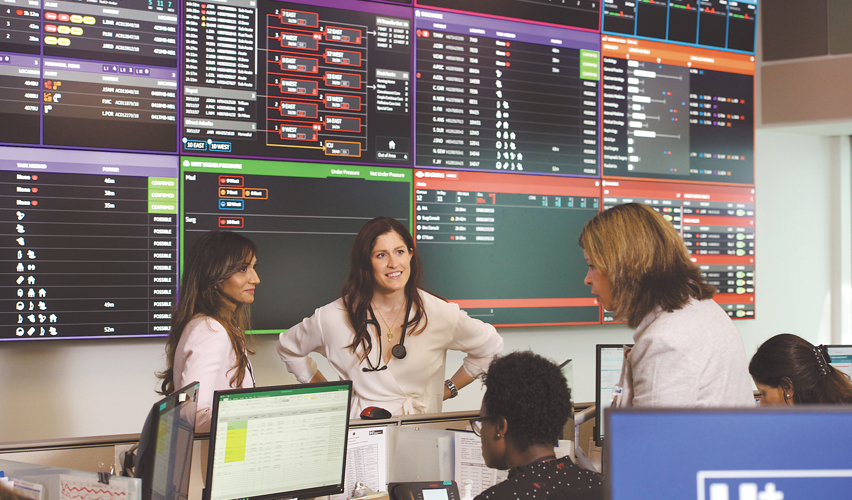 TORONTO – Humber River Hospital has launched the world’s first clinical analytic applications in a hospital Command Centre. The new solutions use real-time clinical data, early warning algorithms and AI to identify issues and raise the quality of care. The hospital worked in partnership with GE Healthcare to develop the Command Centre and its new capabilities.

At the Command Centre, a team of trained staff continuously watches for alerts, logjams and trends, and takes actions to alleviate potential problems throughout the hospital.

The centre first began in the fall of 2017 with systems to track patient flow throughout the hospital, ensuring timely movement from admission to discharge. Humber River is now adding clinical monitoring and analytics to keep tabs on the health of vulnerable patients so they can be helped at the earliest possible stage.

Four clinical applications are being added to start. In September, the hospital switched-on two of them, “Mothers and Babies” and “Risk of Harm”. Mothers and Babies tracks the health of mothers in labour and delivery, and alerts staff when there is an elevated risk, so that timely interventions can be taken.

Risk of Harm tracks patients throughout the hospital and ensures that tests, meds and precautions are all managed in a timely fashion. It also contains algorithms to detect the onset of sepsis, and protocols to manage patients with sepsis to reduce the chance of its progression.

The applications leverage early warning systems (EWS) developed in various centres of excellence around the world. But Humber River has enhanced these EWS by focusing on follow-up actions – the steps needed to alert the appropriate individuals and to deliver care in rapid response.

So, for example, its new “Mother and Baby” early warning system tracks vital signs like heart rate, blood pressure and oxygen levels, and accounts for factors like the fetal heart rate, patient history and physician orders.

When the system detects a mother or baby in distress, or with signs of possible future problems, it creates an alert – which can be seen both in the Command Centre and on monitors on the floor.

Moreover, it will send the alert directly to nurses on the Labour and Delivery Unit, and it also sends instructions on how the problem should be handled.

“The alert is pushed directly to the nurses’ Ascom phones,” said Jhanvi Solanki, Director of Inpatient Surgery and the Maternal and Child Programs. “And if action isn’t taken in a certain amount of time, it rolls over to the resource nurse and obstetrician.”

By detecting potential problems, and sending alerts and instructions to nurses, “we can intervene immediately, instead of the next hour or so,” said Solanki.

This proactive follow-up adds a dimension that’s missing from many early warning systems, where problems may be detected, but actions may not occur.

She noted that Humber River defined the algorithms used in the Mother and Baby system, identifying the factors that indicate the onset of various problems. The team worked with GE Healthcare to develop the analytics and rolled out procedures for Command Centre and nursing staff to follow when an alert is triggered.

“All of our metrics are aimed at driving down the rate of complications and providing comprehensive, patient and family centered care,” said Solanki.

The Seniors Care tile recognizes that seniors have vulnerabilities that require special attention to ensure the best possible outcomes, even if those vulnerabilities are not the primary reason for a senior patient’s stay, noted Zahava Uddin, Managing Director of GE Healthcare Partners Canada.

“Patients with delirium, mobility risks or urinary incontinence, for instance, alert on the tile when recommended interventions have not yet been carried out, thereby prompting Command Centre staff to work together with front line staff throughout the hospital to help reduce readmissions, shorten patient stays and most importantly improve the rate of patients discharged back home,” said Uddin.

According to Humber River Hospital, since the launch of the Command Centre, the hospital has improved its efficiency, resulting in the equivalent of 35 additional beds. With the new clinical applications, the hospital expects to see increased outcomes which leads to even more benefit to the hospital and, more importantly, to the patient.

An upcoming phase of the Command Centre will see analytics added that further integrate the hospital with the community, so that more patients can receive care at home.

Peter Bak, Chief Information Officer at Humber River, has noted that AI, medical devices and remote monitoring can be combined to track the health of patients at home, intervening at an earlier stage than ever before. In this way, many patients can be helped before needing to visit the hospital, thereby reducing crowding and “hallway medicine.”

Bak said the hospital is continually using machine learning in its systems to predict which patients will need an intervention. And machine learning tweaks itself as it goes along, learning which factors are most important.

The goal, of course, is to produce better outcomes for patients – whether it’s predicting and stopping the early onset of sepsis, assisting a mother in childbirth or ensuring an elderly patient has received the necessary consults before being discharged from hospital.

The analytics used at Humber River are helping to achieve these goals. Bak notes that it’s being made possible by the support of the hospital’s doctors, nurses and other healthcare professionals: “We have incredible engagement from our clinicians.”