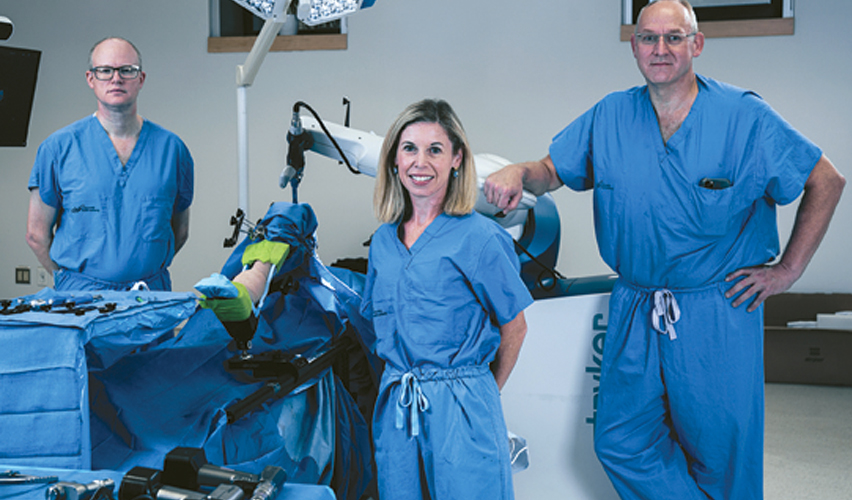 Halifax, a centre of excellence for robot-assisted surgeries

Only the second robot of its kind in Canada, the Mako SmartRobotics system offers unprecedented precision for the placement of joint implants. However, according to Dr. Dunbar, it is in use in more than 1,000 locations in the United States alone and has been used to perform more than 600,000 procedures worldwide.

QEII Health Sciences Centre began the transition to robotic surgery with the acquisition of a da Vinci robot from Intuitive Surgical in 2019 and followed up the following year with the purchase of a Stealth Autoguide from Medtronic. The da Vinci system is used to perform gynecology, urology and ear, nose and throat surgeries, while the Stealth Autoguide is used by QEII neurosurgeons to perform cranial surgeries.

Dr. Gail Tomblin Murphy, vice-president of research, innovation and discovery at Nova Scotia Health, credits the combination of world-renowned surgeons, the generosity of donors to the QEII Foundation’s fundraising campaigns, engagement with industry partners and a supportive provincial government for Nova Scotia’s leadership in robotic surgery.

Dr. David Clarke, head of Neurosurgery, who led the team who brought the Stealth Autoguide into clinical use, credits “surgeons at QEII who recognize the importance of robotics and the role it will play. Of equal importance,” he adds, “are our relations with industry and the institutional support that enables us to do things a little more quickly and nimbly than might happen in some other centres.”

The Mako SmartRobotics system personalizes the procedure based on a patient’s individual anatomy by using a CT scan of the knee to precisely plan the surgery. “Working off a 3D CT scan as opposed to a 2D image on plain film is a major step forward,” said Dr. Dunbar. “It would be analogous to designing your house in AutoCAD and being able to actually walk through the space and check it out before you build it as opposed to designing it in the conventional way on a sheet of paper.”

“We can take the computer-generated model of the knee implant, put it in virtual space on the 3D CT scan and then virtually change its position and size until we optimize what we want to do at the time of surgery. Once the plan is fed into the robot, it knows where the bone is in space and where the surgeon has planned the cut. It only allows us to cut in the planes we’ve decided before surgery,” explained Dr. Dunbar. “If we’re outside the plane, the robot turns off.”

The procedure takes the same amount of time in the OR as conventional knee replacement surgery and “it’s almost a wash in terms of cost,” but shorter lengths of stay, less need for time-consuming revision operations, and improved patient outcomes are cited as some of the benefits of using the Mako SmartRobotics system.

“We’re also able to do partial knee replacement surgeries more often,” said Dr. Dunbar. “They’re harder to do, but if you do them well, there’s a more natural outcome with a lower complication rate. You really need advanced technology to do them.”

Hip replacements will also be performed using the Mako robot once everyone is comfortable with the technology.

Neurosurgery: QEII was one of three centres worldwide and the first hospital in Canada to perform biopsies of brain tumors using the Medtronic Stealth Autoguide robot; in the last year and a half, the technology has been acquired by several other hospitals across the country.

Having partnered with Medtronic to perform a preclinical evaluation of the technology, QEII was able to negotiate a favourable price for the robot and bring the technology into clinical use.

Dr. Clarke cites a 50 percent reduction in OR time using the Stealth Autoguide, a much smaller incision – one centimetre versus an incision of four or five centimetres for a traditional biopsy – a same day or next day discharge for the patient and less usage of disposable items. A calculation of the savings predicted the robot would pay for itself in two years.

“The most important benefit is the elimination of human error,” he said. “Using conventional methods, you could end up with an unexpected hemorrhage or stroke if you’re off target, or you may end up with tissue that doesn’t give you the answer you wanted, in which case the patient may have to return for a second procedure. These are all things you want to avoid.”

Pre-operative MRI and CT imaging of the brain is fed into a Stealth Image Guidance system to plan the trajectory for the biopsy. The robot then integrates with the plan in the operating room to assist the surgeon in the surgery.

“It’s a system that is designed to quickly and accurately plan the trajectory for getting to a target,” explained Dr. Clarke. “That means taking into consideration the bony anatomy of the skull and the vascular anatomy of the brain to avoid injuring a blood vessel on the way in. It helps us take the most efficient and safest route to get to the target.”

Aside from performing biopsies, the Stealth Autoguide can be used to place electrodes in the brain in patients with epilepsy and Dr. Clarke’s team has used the robot to deliver radioactive material to treat brain tumors.

Dr. Clarke estimates that the Stealth Autoguide is used for between 40 and 50 procedures per year.

While Nova Scotia Health and QEII are leading the adoption of robotic technology, Dr. Dunbar laments the less than rapid adoption of the technology elsewhere in Canada. He attributes the much more extensive use of the technology in the United States to the latter’s competitive healthcare business model and the purchase of robots by surgeons themselves.

“We don’t have that business model in Canada because we’re a publicly funded system,” he said. The downside, though, is that “we’re becoming less relevant as training centres and we’re not keeping our surgeons up to speed on advanced technology.”