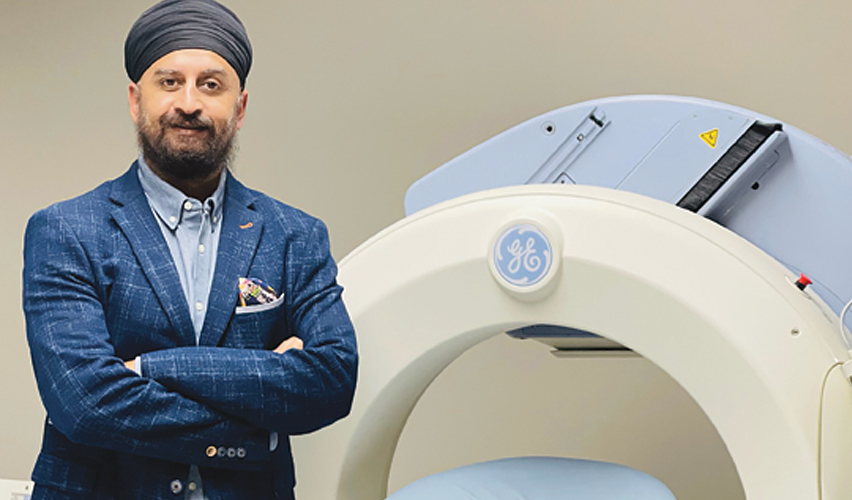 Montreal, Toronto and Edmonton are known as Canada’s powerhouse centres for the development of artificial intelligence and machine learning – the federal government even designated them as such in its AI strategy. But a Calgary company is putting its city on the map, too, with advanced AI projects for cardiology.

Dr. Anmol Kapoor, a Calgary-based cardiologist, launched CardiAI in 2018 to develop AI solutions for heart-related problems. The company has a deep pool of expertise – it employs 150 people who not only devise new technologies but also operate cardio clinics across the province. They include cardiologists, technologists, and software engineers.

On one front, CardiAI is developing an AI system to improve nuclear medicine imaging – one of the main diagnostic tests used for heart patients to evaluate cardiac function.

In many cases, physicians not only look at the images generated by the nuclear med scanner, but they also consider the results of cardiac stress tests, as well as physiological indicators, like heart rates and blood pressure. Normally, when making an assessment using nuclear medicine scans and other data, cardiologists are right in their assessments about 85 percent of the time.

For their part, the team at CardiAI is pulling together all of the data and looking for patterns using machine learning (ML), as an enhanced way of spotting potential problems for cardiologists.

He said a small pilot project was successful, and the company is now organizing a larger trial. The goal will be to eventually gain U.S. FDA approval, as well as authorization from Health Canada.

In another area, CardiAI is working to apply AI to the results of Holter monitors, the devices that heart patients often wear to collect data for 24 to 48 hours or more. Using the data, physicians can detect problems like arrythmias.

Dr. Kapoor was spurred to investigate this problem by a patient who was experiencing heart failure, and was very frail, but had to continuously go to doctors’ offices and labs for tests and consultations. It was extremely difficult for the patient, who found the constant appointments to be exhausting.

Despite the medical attention, the patient died. Dr. Kapoor realized there was a better way to treat HF patients such as this one; instead of requiring them to go to medical offices and labs, a Holter monitor, and other technologies, could be used in the homes of patients and analyzed with the help of AI software.

With AI applied to the data that’s collected, problems could be quickly flagged, and clinicians could be alerted.
This is one of the systems that CardiAI is working on right now.

Dr. Kapoor noted that Holter monitors generate hours of data, which must be cleaned by technicians and then analyzed by cardiologists – a lengthy and laborious process. Using AI, however, the tasks can potentially become fast and easy.

The goal, of course, is to train the AI system to recognize problems in the data as well as a cardiologist would. To this end, CardiAI has been building its own repository of data, from which the system learns to spot possible problems.

Dr. Kapoor said the solution has been pilot tested on over 500 patients, with data in each case collected over a five-day period. “It’s a huge amount of data, about 500,000 heart beats per patient,” he asserted.

The company believes it will have a model that performs with a high rate of success ready soon and hopes to run a larger clinical trial this year. Again, it will be seeking approvals from both the FDA and Health Canada.

CardiAI is also devising a point-of-care blood testing kit that can be used by patients at home to detect heart and kidney problems. This technology, too, will help patients by allowing them to stay in the comfort of their homes while giving them access to clinical tests.

The kit enables patients to perform a natriuretic peptide test – sometimes called a BNP or NT-proBNP test – wherever they might be. High levels of these substances in the blood can indicate the heart isn’t functioning properly.

However, natriuretic peptide tests normally require the patient to go to a medical lab.

“Patients shouldn’t have to go to a lab for a blood test,” said Dr. Kapoor. “Using this system, we can make a diagnosis from a finger-prick.”

He added, “I want to disrupt how laboratory work is done.”

Again, AI will be used to analyze the results of some of this testing.

Overall, Dr. Kapoor said that new technologies are changing the nature of healthcare and how it is delivered. Just as Fitbits and Apple watches are putting more information into the hands of patients and enabling them to monitor their health on their own, Dr. Kapoor intends to create additional technologies and tests that make life easier for patients.

“We’re moving the door from the ER to the patient’s bedroom,” he said.

While the company has a good deal of clinical expertise, it has also benefited from a relationship with Edmonton-based Alberta Machine Intelligence Institute (AMII), an AI lab that provides assistance to Alberta companies. CardiAI also gained support from the Prairies Canada Regional Innovation Ecosystem program and works with the federal MITACS program.

Not only is CardiAI targeting the U.S. and Canadian markets, but it’s also intending to commercialize its technologies and sell them around the world. Dr. Kapoor realizes that can be a challenge. “It’s one thing to develop a technology, it’s another to scale it up,” he said. “Once they reach the commercialization stage, most companies falter.”

However, CardiAI already has international connections and operations, such as running clinical trials in other countries. “We have more experience in international operations than most companies do,” he said.