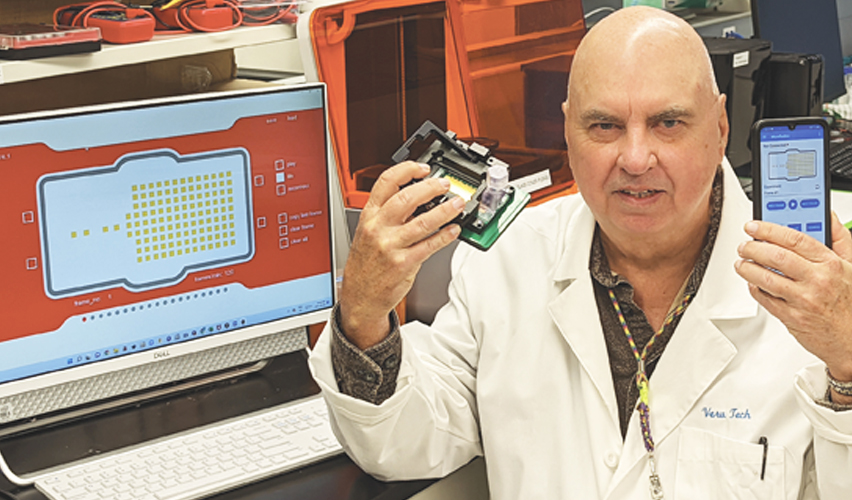 The system uses a drop of blood from a finger prick, a disposable test cartridge and a Bluetooth-enabled Vi analyzer to transmit test results to a smartphone app in 15 minutes.

The company operates a lab at the state-of-the-art Health Sciences North Research Facility in Sudbury and has 12 employees, including biochemists and biomedical engineers.

The accuracy of the tests for cholesterol have been found to be “as good as or better than results from point-of-care devices on the market,” said Sutton.

Sutton, who has a background in applied physics and information technology, served as director of IT at both Laurentian University and Sudbury Regional Hospital (now Health Sciences North) prior to founding Verv Technologies in 2012.

“We soon ran into the problem that most people who think of doing microfluidic tests in the home run into, which is that there’s no easy way of separating plasma from whole blood,” said Sutton. “In central labs, centrifuges do it, but you can’t put a centrifuge in someone’s home.”

Sutton came up with a solution in 2019 and has patents pending in Canada, the U.S., Europe, India and China. “It gives us a unique way to separate plasma in a passive system that then allows us to do all sorts of tests.”

Verv Technologies is initially targeting health-conscious consumers who want to maintain and manage their health – “the same consumers who buy Fitbits and Apple cardio watches,” said Sutton. “We think the consumer market in the U.S. is enormous and our investors see that, too.” Using the Verv smartphone app, consumers will be able to track their results over time.

Sutton sees Verv Technologies’ main competition as dried blood spot testing by companies like Everlywell that require consumers to send their samples through the mail and wait one or two weeks for the results.

While its immediate target is home use, “eventually, we have no doubt that we’ll also end up serving the point-of-care market,” said Sutton. “In fact, we’re already working with McMaster University in Hamilton to put a PSA test they developed on our device. We’ll also be able to do urine and saliva with our system, but right now we’re working on blood.”

Sutton acknowledges encountering some skepticism due to the demise of Theranos, the now defunct blood testing company, whose former CEO, Elizabeth Holmes was convicted of criminal fraud, but points to the defunct company’s “$8 to $9 billion valuation” as indicative of the interest in alternatives to conventional blood testing technology.

He cites bottlenecks associated with centralized blood testing for COVID-19 and the resulting reliance on rapid testing kits for home use as additional evidence of the need for alternative blood testing technologies.

Verv Technologies has had previous injections of funding, including $140,000 from the National Research Council of Canada, $500,000 from the Northern Ontario Heritage Fund Corporation and $250,000 from the Sudbury Catalyst Fund, but the $3.8 million from Randox Laboratories is special, noted Sutton.

“It’s our biggest raise to date and it’s from a company in the industry that looked at our technology and really liked it.”

Peter Fitzgerald, founder and managing director of Randox will join the Verv Technologies’ board.

The injection of capital will be used to hire an engineering firm to take the Vi prototype and design a device for the consumer environment. It will also be used to develop more tests and help navigate the regulatory process.